Tablet Microsoft Andromeda can be equipped with curved display 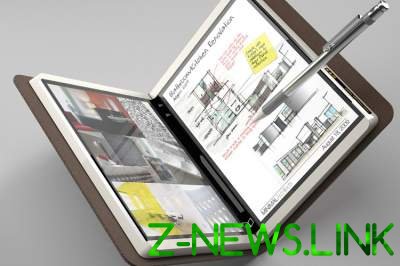 When folded it’s the size will be comparable to a large smartphone.

The main feature of novelty will become collapsible design in the form of a book. The device supposedly will have two touch screen display that will mimic the page. Users can take notes using a special pen, draw, and interact with the screens with your fingers.

It is known that the folding tablet will get the phone functionality, that is able to work in cellular networks. However, it is emphasized that the device cannot be classified as smartphones or phablets.

According to preliminary data, the hardware Foundation will be a ARM-processor Qualcomm Snapdragon. As a software platform you plan to use Windows 10 operating system with a set of special applications.

It should be noted that earlier Microsoft has already designed a foldable tablet with two multi-touch displays according to the Courier project (on the images). The idea was to simulate a conventional notebook, a pen and paper. But subsequently the Corporation for a number of reasons have turned this initiative. Now, it seems that the Redmond giant decided to revive the concept in the face of the Andromeda device. Alas, on the possible timing of the appearance of this gadget on the commercial market, not reported.

See also:  Apple Watch ahead of the sales of Swiss watches