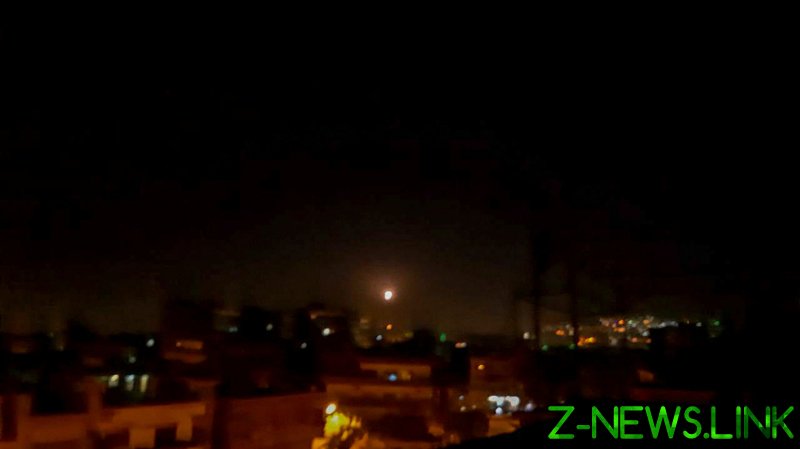 The Israeli strike reportedly targeted a site in al-Dumayr, located some 24 miles (40km) from the Syrian capital, the Syrian Arab News Agency (SANA) reported early on Thursday morning. The country’s air defenses were said to have intercepted “most of the enemy missiles,” according to a military spokesman. “The Israeli enemy carried out an air aggression with bursts of missiles from the direction of the occupied Syrian Golan, targeting some points in the vicinity of Damascus,” the spokesman told SANA, adding that the attack wounded four soldiers and inflicted “some material losses.”

Reports of the Israeli bombing come after the Israeli military announced they are launching a far-reaching attack on surface-to-air batteries in Syria in reponse to an alleged missle launch from the Syrian territory that triggered sirens near the secretive Dimona nuclear facility in Israel’s southern Negev province.

Israeli Defense Forces (IDF) claimed that a long-range SA-5 surface-to-air missile was launched from the direction of Syria and “towards IAF jets.” The missile allegedly exploded and landed in the desert Negev region, spokesman Hidai Zilberman told the Jerusalem Post. The reported launch came amid Israeli strikes on Syria, he added without elaborating.

While there have been speculations that the Dimona facility was specifically targeted in the reported missile strike, Zilbermann appeared to have rejected the assumption, saying that he believes the missile was not meant to strike any particular site on the ground.

Israeli warplanes routinely rain down missiles on the Syrian territory under the pretext of targeting Iranian positions there. Tehran has backed Damascus in its fight against Islamic State (IS, formerly ISIS) as well as against Western-backed militants.  Earlier this month, four Syrian servicemen were injured in the reported Israeli missile attack on April 8, that came from the direction of Lebanon and the Israeli-occupied Golan Heights.