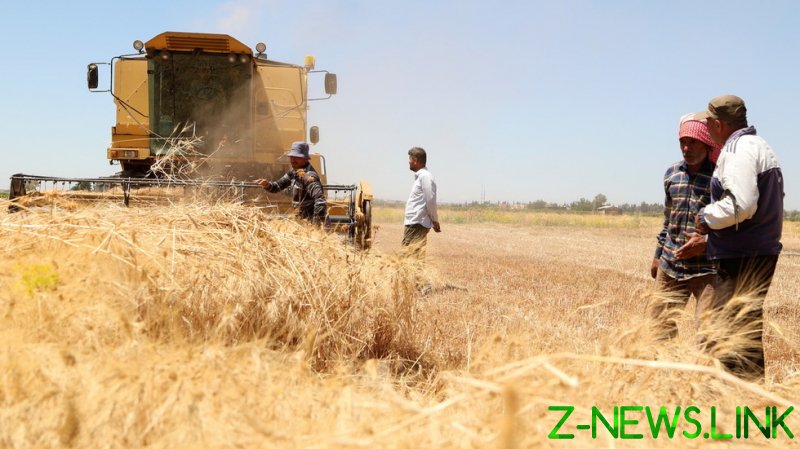 A recent article on Reuters would have readers believe the current Syrian wheat shortage mainly due to drought. The article makes a passing reference to the crippling Western sanctions choking Syrians, but doesn’t emphasize how those sanctions contribute to the wheat shortage, as well as the fuel shortage, massive hyperinflation, and an all-round worsening of Syrian lives.

On June 16, Prensa Latina reported on wheat theft by US occupation forces noting, “a convoy of 32 trucks and containers loaded with looted wheat left for Iraq… The column was guarded by vehicles of the so-called Syrian Democratic Forces (FDS).”

There are a host of other factors that have plagued Syria’s crops in recent years, largely ignored in Western reporting.

In May last year, Syrian state media, citing civilian sources in southern Hasaka (northeastern Syria), reported,“a US Apache helicopter dropped a number of thermal balloons while flying close to the ground, setting a number of fires and burning more than 200 dunums (200,000 square metres) of wheat fields in Adla village, in Shaddadi countryside.”

In June, Syria’s then-Permanent Representative to the UN, Dr. Bashar al-Ja’afari, spoke of “thousands of hectares of wheat fields” set ablaze, and further noted the US’ theft of Syrian oil, cotton and sheep.

And, as I wrote, “Civilians from affected areas near Turkish occupation posts likewise blame Turkish forces for setting fires and firing live ammunition upon those who attempt to extinguish the fires, farmers literally watching their livelihoods go up in flames. The Hasakah Agriculture Directorate director likewise blames Turkey for arson of the crops.”

In July 2020, British journalist Vanessa Beeley wrote of the crop fires and the US economic war against Syria, noting:

At the same time, Turkey is reported to be forcing Syrian farmers to sell their wheat to Turkey in exchange for Turkish currency and US-backed Kurdish contras have restricted the sale of wheat to Damascus and are stockpiling reserves in areas they control, which account for an estimated 70 percent of total Syrian wheat production.”

In June 2019, Reuters reported that even the UN admitted the possibility that terrorists had set fire to wheat crops, although it also pushed the line that “both sides” were accused of having done so. This is an utterly illogical claim, just as illogical as the claims of the government starving its people in Aleppo, Madaya, and in Ghouta, etc. – as I learned by going to those areas and speaking with civilians – turned out to be lies, obfuscating the terrorism of ‘rebel’ groups occupying those areas.

Did the government ignore the droughts?

Critics of the Syrian government claim that it did not address the issue of droughts seriously. But is that true?

Writer Louis Allday, in 2015, wrote of his 2009 experience as a research intern at the British Embassy in Damascus. He spoke of a UN briefing he attended in Damascus in July that year, saying that the UN Drought Joint Needs Assessment Mission (JNA) “praised the response of the Syrian Government more than once,” and, “summarised the measures that the government had already taken, these included the following:

Allday wrote of Syrian government representatives who had “openly asked for financial assistance (both short- and long-term) from international donors and stated that the Syrian Government’s efforts alone would not be sufficient to cope.”

He finished by stressing that such attempts to claim the Syrian government had ignored drought issues was “at best, an unfair and inaccurate simplification of how the Syrian Government actually responded to the drought. At worst, it is an intentional and dishonest attempt to obscure the government’s evident attempts to solve the crisis and mitigate its impact.”

In May 2021, the Food and Agriculture Organization (FAO) offered further nuance. It noted that, aside from drought, “high costs of inputs hinder agricultural activities.”

The FAO reported that “the high cost of fuel and its widespread shortage have constrained the use of irrigation, especially during the crucial development stages for the wheat crop in the spring.

Increases in transportation costs hamper marketing activities. High production costs may also induce farmers to not harvest the entire area planted with cereals and lease out the fields for grazing, usually by sheep and goats, whose owners remain under pressure from high feed prices. Leasing out the fields is likely, particularly in the rainfed areas where expected yields are lower.”

The report spoke of Syria’s economic crisis increasing production costs and hampering “the access of farmers to agricultural inputs, which are mostly imported.”

In June 2019, I met with a representative from Syria’s Ministry of Agriculture to discuss wheat and other agricultural issues. I was later emailed a report, ‘Reality of Wheat Production and Marketing up to 17/6/2019’, which noted some other reasons for poor crop production, including:

In a September 2020 article, Beeley also noted the difficulty of fighting fires in Syria, noting that the Syrian Civil Defence is using badly outdated equipment in need of maintenance.

“Equipment is maintained by local engineers who do their best to repair and restore machinery which is old and tired. Much of their equipment was stolen by the terrorist groups and the White Helmets when they invaded and occupied areas of Syria from 2011 onwards.

“Under the sanction regime imposed by the US Coalition, it has been impossible for the authentic Syria Civil Defence to replace the stolen equipment.”

While negating these various factors, and only in passing mentioning the sanctions, Reuters’ report was actually fairer than most others in recent years on issues of drought and wheat. Most outright blame the ‘Assad regime’ for a wheat and bread crisis, with no mention of the above considerations.

However, according to Human Rights Watch (HRW), (which never misses an opportunity to blame Syria!), the wheat and bread shortage is due to “bakeries destroyed” and “discriminatory policies” but none of the host of reasons I’ve listed!

For their report, in addition to collecting information online, HRW noted they spoke to (a whopping!) “10 residents in government-held Syria.” Wow, definitive!

Regarding the discrimination claim: the report’s authors claim there are separate bread lines for members of the military and members of the public. But in my many experiences in Syria, walking past the bakeries providing the ridiculously inexpensive bread, among the long lines of people waiting I’ve seen civilians and soldiers in the same queues.

On the note of subsidized bread, remind me when HRW’s America offered that to its impoverished citizens. I won’t hold my breath…

Accusing Syria of depriving civilians of bread is an old theme. Last year, when a curfew was briefly implemented in Syria, an Istanbul-based war propagandist took to Twitter to claim that the government wasn’t providing subsidized bread.

So, being in Damascus, I started documenting volunteers (often Ba’ath Party) distributing bread door-to-door in districts around the city. And for the sake of getting a wider scope on the situation, I asked friends in other provinces.

That the media continue to push illogical lies about Syria, ten years on, is unsurprising. The bottom line, once again, is that those screaming that Assad is the reason for these crises don’t actually care about Syrians and actively avoid the truth for the sake of their own twisted narrative.

As I wrote recently, “If America truly wanted to alleviate the suffering of Syrians, all sanctions against the country and people would be immediately lifted.”