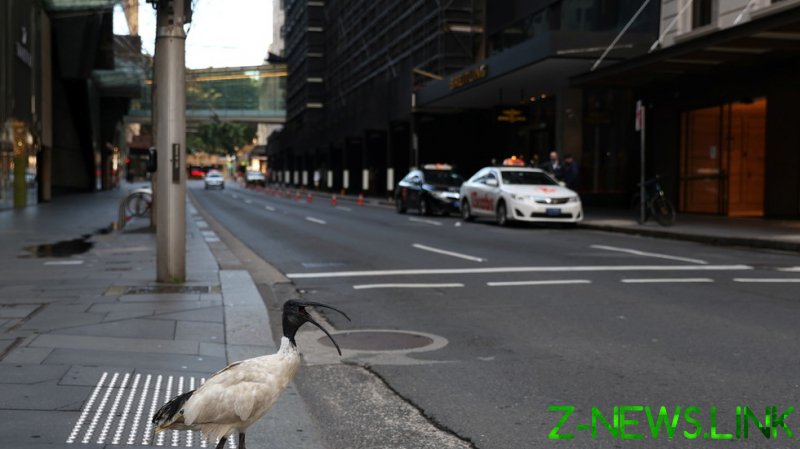 Another three Sydney areas were placed under a strict lockdown on Thursday, putting the total number of districts living under the sweeping restrictions at 12. New South Wales Premier Gladys Berejiklian said the extension of the measures is necessary despite the fact that “some (of the areas) only had one case overnight,” insisting that restricting movement is nevertheless necessary to “stop the front of the spread moving forward.”

Although Sydney, a city of around 5 million people, has been living under lockdown since June 26, the draconian measures have so far borne little fruit in terms of reducing the number of cases to near-zero – the stated goal of the Australian authorities. On Thursday, the state reported 345 new cases and two deaths from the virus. Both deceased patients were men in their 90s.

In addition to the more transmissible nature of the Covid-19 Delta strain, the current outbreak has been blamed on lockdown violators. Speaking on Thursday, NSW Police Deputy Commissioner Mick Willing admonished people “who are recklessly not abiding by the current health orders.”

“Just this week we saw a person travel out to Parkes without a reasonable excuse,” he said.

In order to bring those defying the lockdown rules into line, Berejiklian said she expects the state police commissioner to request more military assistance in patrolling the near-empty streets.

“We are ensuring that no stone is left unturned,” the premier said. The spokesperson for Defense Minister Peter Dutton confirmed to Reuters that government officials indicated they would soon file a formal request for more troops.

It’s unclear so far how many soldiers will join the 580 unarmed army personnel who have already been deployed to the city. As part of the ongoing crackdown, state police have issued 407 fines, including 176 for failing to wear a mask, within the last 24 hours.

Sydney’s outbreak has also been linked to the first local case of the virus in the Australian Capital Territory (ACT) in more than a year. The patient is reported to be a man in his 20s. The case triggered a snap one-week lockdown for the whole of Canberra, with ACT Chief Minister Andrew Barr calling it “the most serious public health risk” the area has faced in a year. The lockdown resulted in the closure of schools, except for the children of essential workers. The authorities also reportedly told local teachers to prepare to switch to online learning in case the lockdown is extended.