Home / WORLD / Sydney extends lockdown yet again, forcing city of 5mn to stay home for another MONTH amid small spike in Covid cases

Sydney extends lockdown yet again, forcing city of 5mn to stay home for another MONTH amid small spike in Covid cases 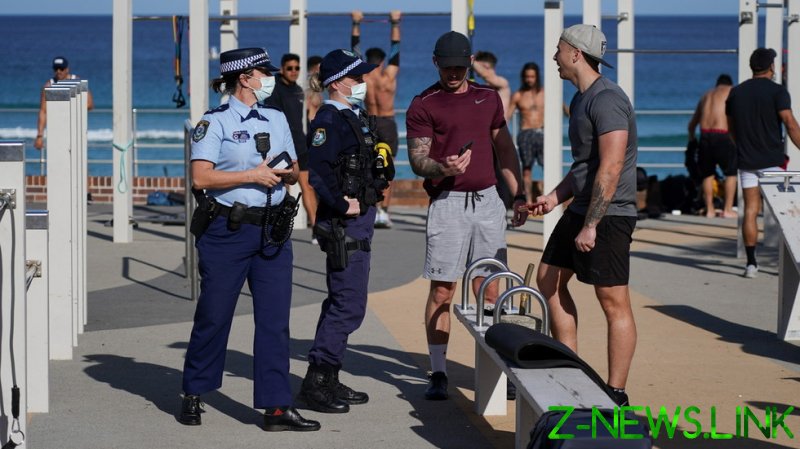 While the city had planned to exit a prior lockdown by the end of the week, officials instead extended the restrictions into late August on Tuesday, with New South Wales Premier Gladys Berejiklian lamenting the decision while claiming it is necessary.

“I am as upset and frustrated as all of you that we were not able to get the case numbers we would have liked at this point in time but that is the reality,” she said during a televised news conference. “We have to deal with the cards before us and the situation before us and that is why we have taken the action we have.”

New South Wales, of which Sydney is the capital city, reported 177 new infections on Tuesday, slightly up from the 172 tallied on Monday. With just over 2,100 “active cases” in the state, NSW’s numbers remain low next to comparable regions abroad, though officials there have taken a stricter approach to their pandemic response, looking to prevent any and all new cases.

The lockdown restrictions will continue to bar residents from leaving home except to obtain food and other “essential” goods and services. They will also be permitted to leave for “essential work,” medical care, including vaccinations, and for outdoor exercise.

The new cluster of infections in NSW was traced back to an unvaccinated airport transit driver in Sydney, with cases subsequently spreading to several thousand people. Eleven deaths have been tallied during the recent outbreak.

Elsewhere in the country, the states of Victoria and South Australia lifted their own lockdown orders after also seeing small outbreaks.

Pointing to NSW’s low immunization rate of just 13%, Berejiklian insisted that “vaccination is the key to our freedom” on Tuesday, suggesting the lockdowns would only be lifted as the vaccine roll-out picks up steam.

“I want August to be the month where everyone comes forward to get the jab,” she said. “That is key to us being able to see what September looks like. I don’t think anyone can deny that the vaccination rate is absolutely key to how we live life in NSW.”