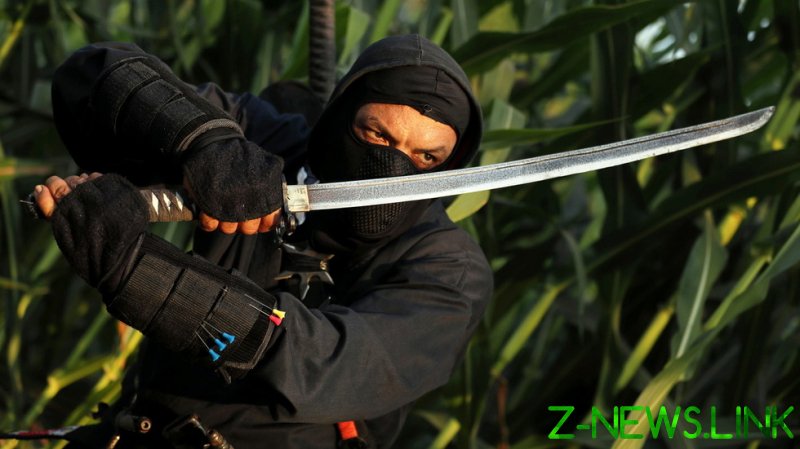 Identified as Gino Rivera, 35, the man showed up at the Inyokern Airport – located in the Mojave Desert some 100 miles north of Los Angeles, California – around 1am on September 18, decked out in a ninja get-up and wielding a large sword, the Kern County Sheriff’s office announced on Friday.

“On 9/18/21 at 1:10 AM, Ridgecrest Substation deputies responded to Inyokern Airport for an assault with a deadly weapon. Deputies discovered the suspect had assaulted a victim with a sword and thrown a rock through a hangar window, hitting an additional victim in the head,” said the sheriff’s office, which was called in to assist the Ridgecrest PD.

When Ridgecrest deputies arrived at the scene, Rivera reportedly “refused to follow commands and brandished a sword,” the sheriff’s office continued, adding that “Non-lethal rounds were deployed but were ineffective.” The suspect then fled, prompting a chase, after which he was tased and “dropped the sword,” allowing officers to make an arrest.

The bizarre incident – first noted by Stars and Stripes, the Pentagon’s official press organ – was initially outlined in an unconfirmed military incident report that appeared on social media.

The report states that an unnamed Army staff sergeant – referred to only as “SSG” in the document – was smoking a cigarette near a hangar at the airfield “when an unknown person wearing full ninja garb, [including] a katana sword,” approached him.

At this point, the person in ninja garb began to slash at SSG, striking his phone and his knee and leg. SSG immediately began running through the parking lot trying to evade the unknown person. SSG jumped the fence and entered the [airport’s administrative] building.

The staff sergeant, along with another unnamed Army captain, then locked all doors into the building and called 911 – all as the ‘ninja’ assailant “was kicking and punching doors and windows.”

After a brief while, the man was said to have left, but returned a few minutes later carrying a “large block of asphalt,” which he proceeded to hurl “through the window of the admin building,” striking the Army captain (“in the head,” as the sheriff’s office would later reveal).

Fortunately, the staff sergeant and captain were able to return to duty soon after the attack, sustaining only minor injuries, though both required stitches, the incident report said. Both soldiers belong to the 160th Special Operations Aviation Regiment (SOAR) – dubbed “Night Stalkers” due to their “proficiency in nighttime operations,” according to the US Special Operations Command.

A bulletin from the Ridgecrest PD dated September 18 also appears to make mention of the incident, reporting a call about a “male [subject] in a ninja costume” “with a sword” who was spotted at the airfield’s parking lot, and that there was “at least one victim” at the scene. The same bulletin noted that about 20 minutes later, officers received another call about individuals “hunkered down in a hanger wondering where help is,” but added that the call was “referred to [another] agency,” presumably referring to the Kern County Sheriff’s Office.