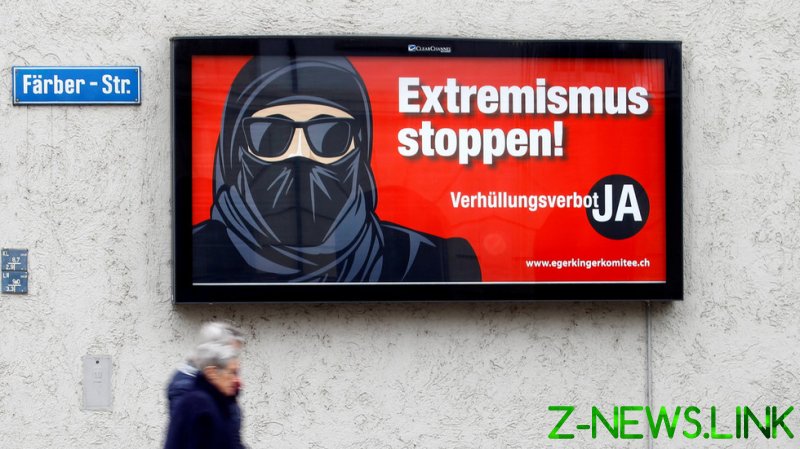 Supporters of the “burqa ban” have prevailed in the Alpine country, with 51.2 percent being in favor and 48.8 percent being against, official data showed after votes were counted.

In line with the Swiss system of direct democracy, the country’s constitution will now be amended to forbid face coverings in public places for all but three specific reasons.

The legislation, which had been promoted by the right-wing Swiss People’s Party (SVP) since 2016, did not mention Islam directly and was claimed by proponents to be aimed at preventing violent rioters from hiding their identities. It was nonetheless dubbed the “burqa ban” by the media and politicians due to also restricting the face coverings worn by Muslim women.

Back in 2009, the SVP initiated a referendum on preventing the construction of new minarets in Switzerland, and also won that vote.

There are several exceptions to the “burqa ban” – it allows the covering of one’s face for security, climate, or health reasons. As such, it wouldn’t contradict the anti-coronavirus measures that oblige Swiss citizens to wear face masks in public places, on public transport, and in indoor workspaces. Muslim women would also be allowed to don burqas and niqabs in places of worship.

By greenlighting the ban, Switzerland has joined France, where full-face veils in public were outlawed in 2011, and such countries as Denmark, Austria, the Netherlands and Bulgaria, where full or partial bans on face coverings are currently in place. Two Swiss cantons had already introduced similar restrictions on burqas some years back.

Referendum committee chairman and SVP member Walter Wobmann blasted Muslim face coverings as “a symbol for this extreme, political Islam, which has become increasingly prominent in Europe and which has no place in Switzerland.” He insisted that showing one’s face was a sign of our “basic freedoms” in the country.

His fellow party member, Jean-Luc Addor, attributed the success in the referendum to SVP’s ability to promote its ideas outside of its core electorate, as left-wing feminists and even some progressive Muslims also campaigned for the restrictions.

But the majority of the Islamic faithful, who make up around five percent of Switzerland’s 8.6 million population, regretted the outcome of the vote.

The Central Council of Muslims in Switzerland said that it was “a dark day” for the community, insisting that the decision made by the Swiss public “opens old wounds, further expands the principle of legal inequality, and sends a clear signal of exclusion to the Muslim minority.”

The group vowed to mount a legal challenge to the laws implementing the ban and organized a fundraiser to pay the fines for women who are prosecuted for violating it.

However, the referendum was more of a symbolic victory for the SVP over the government, which had urged the people to vote against the initiative. The ban is unlikely to change life in the country drastically, as there were only around 30 women who wear face coverings in Switzerland, according to estimates by the University of Lucerne.