Home / WORLD / Swipe white! RT takes a look under the hood of the whites-only dating site for klansmen, Nazis and racial supremacists

Swipe white! RT takes a look under the hood of the whites-only dating site for klansmen, Nazis and racial supremacists 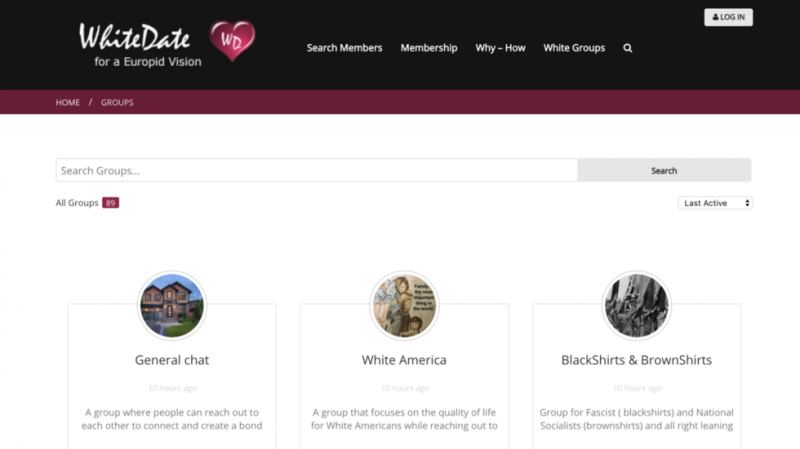 It can’t be much fun dating a Nazi.

Never mind faking an orgasm. How many times can you fake interest in his collection of Third Reich memorabilia? “This death’s head dagger, it once belonged to Heinrich Himmler. And this here is a jockstrap that once supported Joseph Goebbels…” Fascinating.

And what about a hot guy from the Ku Klux Klan? How can you tell if he really is attractive under those white sheets he insists on wearing all the time? At least you don’t need a bed, I guess, if you want to get intimate. You can just lie down under that tree where his black man effigy is hanging, and that burning cross will keep you nice and warm.

There is indeed a dating site where women can find this kind of man these days. And why not, I guess, if that’s her thing? Dating sites such as Tinder and Bumble and Inner Circle and all that have pretty much taken over the entire dating game.

Full stop, end of story. Most new couples these days don’t have a romantic story of how they met as they both reached for the same book in a library or even while mildly inebriated in a plain old bar. They’ve all been shut for ages, and it’ll take time for singles to get in the swing of things again.

Couples invariably met first on a dating app, that’s just the way of the modern world.

There are dating apps for pretty much any niche too. Fancy a bit of the countryside in the form of a nice rugged farm boy? Try Farmers Only. Do you like a man with a big fluffy beard? Get yourself on Bristlr. Fancy nailing yourself a Christian? Then sign up for Christian Connection. Why not sample a circumcised chap, see what that’s all about? Try the Jewish dating site JDate. Etcetera.

Fancy a nice white supremacist? Then try White Date. I did.

I am a bit of a dating app pro, these days. So I went undercover for RT.com as a young lady called ‘Charlene’ to see what it’s like trying to snare a man who wants to ring-fence those white genes.

Here’s the blurb riding over a corny shot of a white man and a white woman walking through a forest like two expectant nymphs.

“We know where we come from, where we belong and wish to share the feeling with like-minded partners.” And then comes an image of a white man and a white woman embracing at sunset on a bridge. Oh God. “We follow classic roles where strong men take the lead and graceful women play the game. Wisely.”

I’m not exactly sure what that one means but it sounds, well, awful. Not my kind of date at all.

Then there’s a shot of a white woman laying her hand on top of a white man’s hand, can’t you just hear those wedding bells starting to ring out? Hang on a sec, though. She’s not so traditional – she has a tattoo on her pinky finger. Maybe it was just clumsy casting? The blurb continues: “We understand that common cultural heritage helps romance to develop in harmony and mutual commitment.”

Now it’s time for an image of a ring on a finger and, somehow, that tattooed pinky now has an Elastoplast on it. Oh dear. “We want long lasting love, marriage and families with numerous, healthy children. Call us… eccentric.”

Nah. I’d just call you ‘uptight’ and a wee bit weird. Anyway, why not give it a bash? I filled in the form to join, and this came back at me.

“You wish to join the neo-traditional white community that is getting attacked from all sides. We need to be very careful about whom we accept… Briefly describe why you joined this white dating site. Your reasons could range from looking for a traditionally minded partner, race awareness, what redpilled you, to what it means to you to be White/Europid, etc.”

First, this term ‘red pilled’ – I think anyway – is from the movie The Matrix; take the blue pill and go back to your old life of ignorant bliss or take the red pill and see the world as it truly is. Lots of strange folk and conspiracy theorists adore The Matrix. ‘Europid’, by the way, is just a fancy word for white, caucasian.

It took a day or two but they let me in, they fell for my change of gender ruse. I had heard there were a lot more men seeking women than women seeking men on White Date and, anyway, I wanted to see what it was like – as a woman. It’s time to flex my inner trans self.

Funny thing is, White Date asks members for their IQ. This is the first dating site I’ve encountered that asks for that. Intelligence though, I don’t mean to rude, is not something normally equated with your average white supremacist, is it? Tattoos and football-violence related scars, military-service maybe – yes. Brains – no.

And nobody asked for proof from Mensa, so I just made mine up – 110 sounds about right. I didn’t want to scare the boys away, they can be nervous creatures around someone far brighter – or taller – than they are. Everyone knows this from the more mainstream apps.

But here goes girls, hold my hand, let’s dive in and have a quick sniff around and then run for the hills. You ready? Spelling mistakes and typos left untidied.

How about ‘Alexander’? He’s 61 and lives in Vancouver, Canada. His IQ is in the 110-119 range and he earns between $20-$40k. “I am well known on the Internet as a white nationalist and National Socialist. I get 5,000+ views a day on my video channel and I’m a thought leader in our community, all over the world. I want a white woman who has similar conservative values.”

Nice. Sounds like a catch? A thought leader with a bog-standard IQ. You better dust off that rubber SS uniform you keep in a box under the bed. 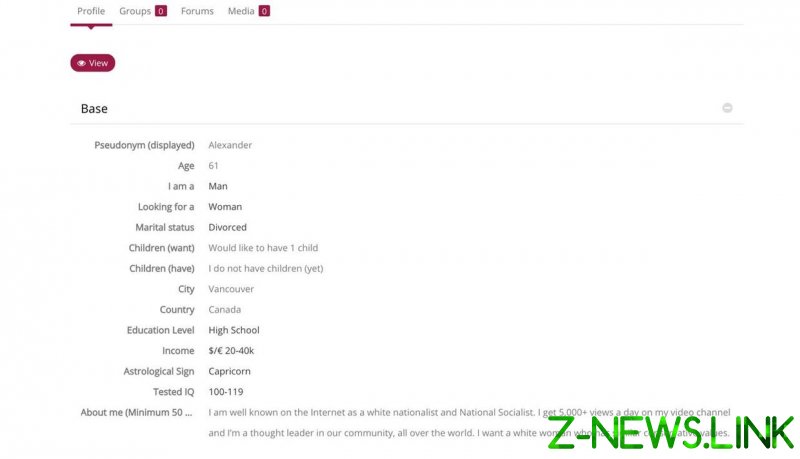 How about ‘Andrew’? He’s a 23-year-old student from Orlando in the US. Andy’s IQ? Ah, he doesn’t say. “I’m looking for a wife who love (sic), is loyal to God, Folk, and Family. I realized given the state of the modern world that I need someone who wants children with a cohesive lineage, someone who wants to create a family that treasures the inheritance they have as the descendants of the European peoples.”

Andrew sounds a bit scary to me. Unfortunately, my account doesn’t give access to any photos – you have to request them personally from the dude, and I’m kinda scared to ask – so I can’t check if he has a thousand-yard stare. I bet he does.

A bloke Marco, I have no idea why, made me laugh. He’s from Bitterfield in Germany and aged 32 – again, no IQ. All the blokes seem to be dodging that question. Marco likes to call himself ‘WhitePower18’. “Hello my name is marco and i’m 32 years old. I am looking for pretty women. The woman should be shorter than me. My height is 1.78m / 5,83feet.”

Marco, you’re not so tall yourself mate – not for a man.

Oh God, and how about ‘Justin’. He’s 23 and from Lawrenceville in the US. Forget the IQ thing, nobody seems to bother. “I’m more of a relaxed person. I don’t drink or smoke, I’ll love to take you on dates whether its at a park, somewhere out to eat, staring up at the stars together, movies, or even games. I’m looking for another beautiful European to give my heart and all to.. I’m 5’11 for those of you wondering if you were wanting to know.”

Finally, is JDog worth further inspection? He’s 22 and from Reno in the US. Mix your white genes with this dude’s though, and you’re gonna be busy breeding and breastfeeding – he wants four kids. “Hi, I’m Jdog just a white Christian man looking for a white Christian woman.”

Anyway, let’s bale out now – I don’t much like it in here. It feels like the start of a weird B-movie, a horror set in the Deep South of the USA. Can’t you hear the music from Deliverance?

Yet, I have to say, if these white boys and white girls want to get busy with each other, who cares? We all have our preferences, I guess, don’t we?

I have a very good female friend who just doesn’t fancy short men, and she met a guy off Tinder one evening pre-lockdown who was very short indeed. Practically a midget. And he was mightily offended by her reaction. What’s she supposed to do? He didn’t tell her his height, she wouldn’t have met him if he had. Maybe he thought he could wing it. I laughed for maybe a full hour when she told me this story.

I once arranged to meet a woman in a beach bar and as she got closer and closer – she got wider, and wider and wider still. She was also dressed in what could only have been an old tent. She was thin in her profile pics! I managed to do a backflip and escape down a sand dune before she saw me. What can you do? You like what you like.

I have another friend who always claimed he had ‘yellow fever’, meaning he always went on dates with Oriental women – and he married one. Me? My history would suggest it’s the dark haired, Latina-type that attracts me. It’s not about race or skin tone though, it’s more about heat and fire.

Anyway singletons, male and female, it’s the weekend and the world is opening up again. We’re better off on Tinder or Bumble – it’s far more fun. See you there.