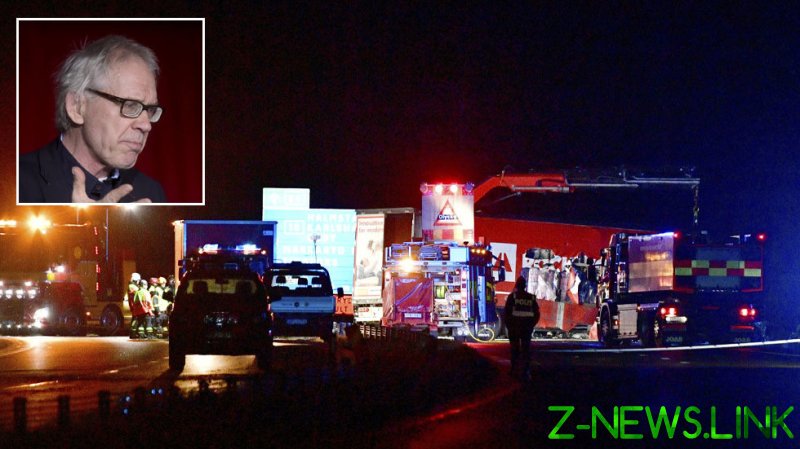 The 2007 drawings of Muhammad placed Vilks at the center of a global debate regarding freedom of speech and respect for religious beliefs. Extremists tried to kill him for blasphemy, which is why he was under police protection.

The cartoonist and his police escort were traveling in an unmarked police car on Sunday when the incident happened. For some reason, the fast-moving vehicle veered onto the wrong side of the road, tearing through a wire fence that separated the lanes, and collided head on with a truck, the local media reported. The collision reportedly completely destroyed the police car and started a fire, which added to the damage.

While the three people in the car were killed, the 45-year-old truck driver survived the incident. He suffered serious injuries and was taken to hospital by helicopter, where police intend to question him. They didn’t immediately express any suspicions of foul play, but a special prosecutor will be investigating the incident.

The person in police protection who was killed in the collision in Markaryd in southern Sweden was later identified as Vilks. The artist was returning home after visiting personal friends in Stockholm.

“It was an unusually cozy dinner,” his host, journalist Stina Lundberg Dabrowski, told Swedish media. “Lars radiated humor and warmth, as always. He had such a liberating way of facing all the bulls**t that had hit him.”

Vilks was arguably the best-known contemporary Swedish artist because of the controversy and violence surrounding his works. The three cartoons he drew in 2007 showed Islam’s revered Prophet Mohammed as a ‘roundabout dog’, a type of street installation that was popular in Sweden at the time.

They were part of a cultural discourse in Europe over self-censorship in the face of threatened violence by people who may be insulted by works of art. Two years prior, Danish newspaper Jyllands-Posten similarly stirred anger among Muslims by publishing 12 cartoons of Mohammed.

Depicting humans in general is forbidden in Islamic tradition, while insulting the Prophet is considered blasphemous. Dogs are perceived as unclean animals in many Muslim countries, though this attitude is not directly based on religion.

Vilks was infamously added to a list of enemies by the terrorist group Al-Qaeda. Swedish police provided him with protection as he faced constant death threats. In 2010, alleged plots to kill him were reportedly busted in Ireland and the US.

In 2015, a lone shooter opened fire near a small event in Copenhagen, which featured Vilks as a keynote speaker. The gunman killed one person and injured several Danish security agents before continuing his spree of violence elsewhere, ultimately getting killed in a shootout with police. Vilks was widely suspected to be the main target.

The cartoons by Vilks were also cited as justification by perpetrators of some terrorist attacks targeting Sweden, including the unsuccessful 2010 bombing plot in Stockholm.

In one of his most recent interviews, published by the newspaper Expressen to mark an anniversary of the Copenhagen shootings, Vilks complained that safety concerns had prevented him from having a normal life. Since 2018, police even barred him from visiting the home of his lifetime partner or moving in with her because she was deemed a security risk, he said.