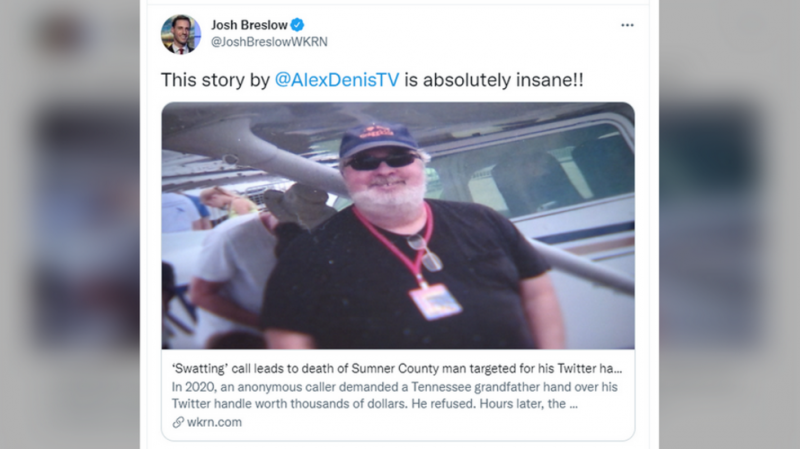 The incident occurred in April 2020, when Mark Herring got a telephone call from a neighbor who told him there were “police everywhere” because they thought a man had killed a woman on his property, Herring’s son-in-law, Greg Hooge, told Nashville’s local ABC News affiliate on Tuesday. Police had come to the scene because of a so-called swatting call, a false emergency report, placed by one of the teens involved in the alleged conspiracy to take his valuable “@Tennessee” Twitter handle.

Herring, a tech-savvy man who lived on a quiet country road and joined Twitter within the first few days of its existence, came out of his house with a gun, thinking the murderer was on his property. “He sees all these cops around him, and they ask if he’s Mark Herring and ‘put your hands up,’” his daughter, Corrine Fitch, said in an interview with the television station WKRN. “So he tosses the gun away from him to show he’s not a threat, hands up.”

But Herring then suffered a massive heart attack and died. “I believe he was scared to death, and that is what caused his heart attack,” another family member, Fran Herring, said.

Earlier that day, an anonymous caller had demanded that Mark Herring turn over his Twitter handle, which was worth thousands of dollars. He refused and had previously declined multiple offers from people who sought to buy it. “He just wanted to be @Tennessee because he loved the Vols,” Fitch said, referring to the University of Tennessee sports teams.

It turns out that Herring was one of multiple targets of a Tennessee boy who sought to obtain high-value social media accounts through extortion, according to a criminal complaint against the then-teen Shane Sonderman. Account owners who refused to turn over their handles were allegedly targeted with harassment by Sonderman and his accomplices. A UK teen allegedly made the swatting call targeting Herring. He reportedly won’t be extradited to the US to face charges because he’s a minor.

After Herring refused the demand for @Tennessee, Fitch said she and other family members started receiving pizza deliveries in her father’s name. Family members were unable to reach Herring and later learned that he was at the hospital.

Swatting is a common harassment tactic used by online gamers, and the Herring case isn’t the first instance of such a hoax proving fatal. A Wichita, Kansas man was killed by police in 2017, after a 911 caller falsely reported that someone at his home had shot his father and was holding his remaining family members hostage. A 26-year-old Los Angeles man pleaded guilty in the case and was sentenced to 20 years in federal prison for making a false report resulting in death, among other charges.