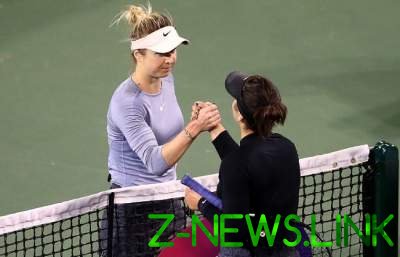 Elina Svitolina failed for the first time in his career to reach the final of the Premier Mandatory tournament in Indian wells.

At the semifinal stage Svitolina in 2 hours and 12 minutes yielded promising canadian Bianca Andreescu which on the way to the biggest success in his career beat three seeded players, including former first racket of the world Garbinie the Wind.

In the first set, Svitolina was leading 3:0 but managed to lose six games in a row. Elina returned to the game in the second game the Ukrainian after the opening exchange of breaks firmly seized the initiative and without problems translated the game into a single game.

See also:  The lions caused a stir in the Indian village. Video

The third set started better Andreescu, but Svitolina was able to recoup from the account 1:3. And yet the fatigue is allowed Elina to win another long match. Feeding on match, Andreescu played three break points and came through to the finals where they will play the ex-first racket of the world, Angelique Kerber.

See also:  Svitolina in the match of the Federation Cup beaten the first racket of the world

Best career performance in Indian wells brought Elina Svitolina 354 thousand dollars in prize money and 390 points in the WTA rankings, which will allow the Ukrainian to return to the top 5.