Svitolina lost the second match at the Final tournament 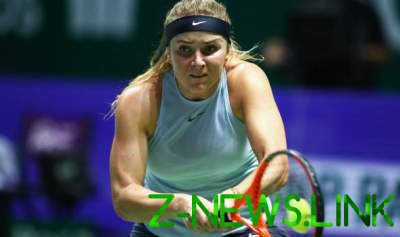 The first racket of Ukraine Elina Svitolina in a serious match lost to Caroline Garcia and almost lost chances of an exit in the semi Final of the tournament.

After a crushing defeat against Caroline Wozniacki Svitolina was one step away from the infamous finishing the competition at the WTA Finals. To keep workers chances to qualify from the group, the Ukrainian had to take revenge from Caroline Garcia for the recent defeat at the tournament in Beijing.

First set Svitolina pulled on the tie-break, trailing 0:4. In the second game the Ukrainian player took a break, 2:1, but failed the next games and let her rival to level the score in sets.

See also:  A rematch Klitschko-Joshua is scheduled for November 11

In the final set, Svitolina was leading 2:0, then with the score 5:3 to serve for the match. Garcia in critical situations has dramatically increased and due to excellent attacking game confidently put the squeeze on Svitolina.

Despite the second defeat Elina Svitolina retained a theoretical chance to the semi Final of the tournament. The Ukrainian need in two sets to beat Simona Halep and expect a confident victory over Wozniacki Garcia.

See also:  Formula 1: Hamilton for the first time in the season was headed by personal offset

The first semi-finalist from the red group was Caroline Wozniacki is Danish rather easily defeated the first racket of the world Simona Halep.
Wozniacki made five breaks, and on his serve played a single break-point.