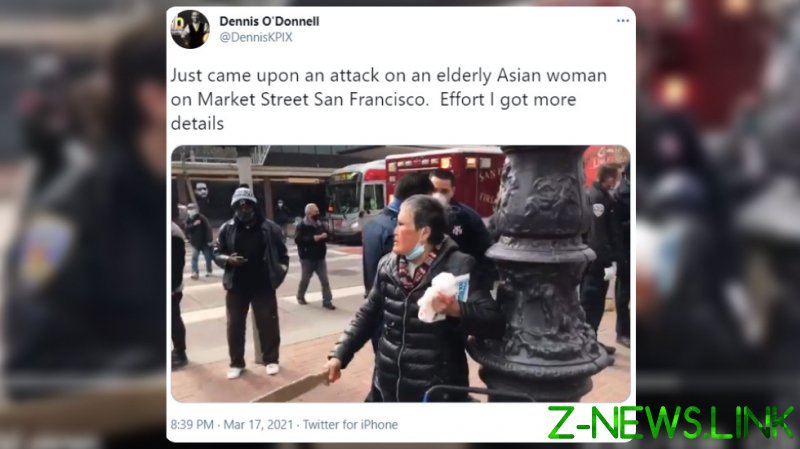 The incident took place on Market Street in San Francisco on Wednesday morning and was first reported by the local CBS affiliate KPIX, whose sports director Dennis O’Donnell happened to be jogging nearby and filmed the aftermath of the altercation.

The video shows an elderly woman holding a stick in her hand, sobbing and angrily repeating in Chinese: “This bum, he hit me.”

The “bum” to whom she was apparently referring can be seen handcuffed to a stretcher as paramedics prepare to take him away.

During a later interview with the station, her face appeared to be swollen and bruised from injuries.

With her daughter translating her words, Xiao Zhen Xie, 76, said she was waiting for the traffic lights when the man suddenly punched her in the head without provocation. She fought back with a stick that she found nearby and evidently had the upper hand – or at least stalled the man for long enough to allow local security guards to apprehend him.

The San Francisco resident of 26 years appeared to be in utter shock after her experience. Her family is accepting donations to cover her medical bills.

The police said another attack targeting an 83-year-old Asian man happened in the same area around the UN Plaza approximately 30 minutes before this incident, and that a 39-year-old man is being investigated for both crimes. The first victim required treatment in hospital. The police said they were determining whether racial bias was involved.

Like other cities across the US, San Francisco is grappling with a surge of violence targeting Asian Americans. On Tuesday, the city’s police department reported the arrest of a 32-year-old suspect in two unprovoked assaults that happened on Monday. The first victim was an unidentified 64-year-old male, whose face was slashed with a knife. The other was a 59-year-old man of Chinese and Filipino descent, who was repeatedly hit in his head and left severely injured, according to the police and local media.