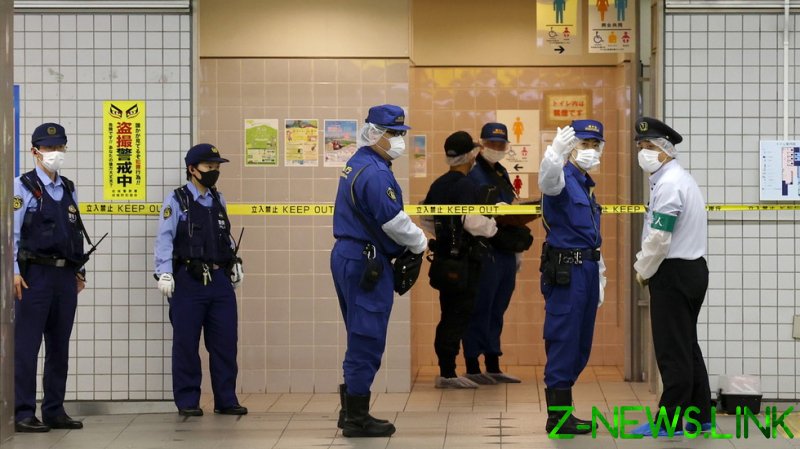 “I have been wanting to kill happy-looking women for the past six years. Anyone would have been OK,” said the suspect, Yusuke Tsushima, 36, Japanese media reported, citing police sources.

Tsushima was further quoted as saying that he had chosen a rapid express Odakyu Electric Railway train because the passengers would have “no space to flee” due to longer time periods between stops.

According to reports, Tsushima was suspected of shoplifting from a Tokyo grocery store and a female shop worker alerted the police. The man was quoted as telling the police that he had originally wanted to return to the store and murder the staffer, but since it was closed, he decided to kill people on a train.

Tsushima was charged with the attempted murder of a 20-year-old female university student, who is in critical condition after sustaining multiple wounds to her back and chest. Other commuters – four women and five men – were also injured in the rampage.

After fleeing the crime scene, Tsushima was arrested later that night at a convenience store, the police were quoted as saying. A store clerk called the police, saying that the man told him he was “tired of fleeing,” according to Kyodo News.

Police seized a 20cm-long chef’s knife, a container with cooking oil, and a lighter from inside the train. The attacker reportedly wanted to use the oil to start a fire on the train, but had failed to do so.

Japan has seen similar incidents in the past. In 2018, a man killed a passenger and injured two others on board a bullet train traveling from Tokyo to Osaka.

In 2015, a passenger set himself on fire while riding a high-speed train, killing himself and another person. More than 20 people were injured while trying to escape a smoke-filled car.