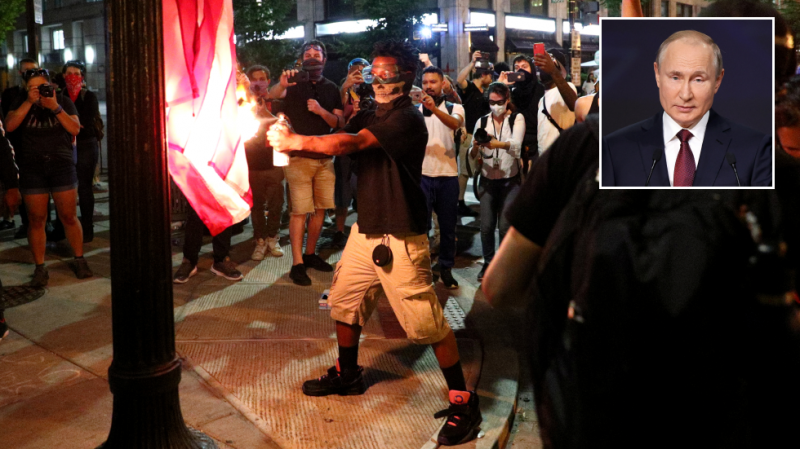 Discussing the Black Lives Matter (BLM) movement in an interview with NBC, broadcast on Monday, the Russian leader said there were “some grounds” for the outcry over racism in America and a number of other Western nations over the course of 2020. However, he added that the outrage had been “used by one of the political forces domestically in the course of election campaigns” in the US.

Putin railed against what he described as “unfounded” accusations that the Kremlin had been behind the supposed election interference and cyberattack campaigns, saying he was “surprised that we haven’t yet been accused of provoking the BLM movement.” The president joked that the allegation “would have been a good line of attack,” while insisting, “We didn’t do that.”

Leading figures in the Democratic Party have publicly embraced BLM, with much of the rhetoric throughout the civil unrest aimed at the policies of then-president Donald Trump, and the issue of racism becoming a major focus in last year’s elections. However, there has been disquiet among some activists since Biden took office in January, with his White House being accused of refusing to take their requests for meetings.

Mass gatherings held in the wake of the killing of George Floyd were supported by many Democrats as an exception to public health measures designed to slow the spread of Covid-19. A number of politicians were also accused of attempting to justify the rioting and looting that accompanied the protests in some areas.

Putin expressed a more conservative attitude towards BLM. He said Russia, like the USSR before it, was sympathetic towards the fight for equality by black Americans, but cautious about the more extreme element of the movement.

“We support African Americans’ fight for their rights,” he said, adding that Moscow was “against any … kinds of extremism, which, unfortunately, sometimes … we witness these days.”

READ MORE: White House walks back Biden comment on hacker swaps, says he’s willing for US & Russia to punish their own cybercriminals – media

“No matter how noble the goals that somebody is driven by, if it reaches certain extremes … we cannot approve of this,” Putin explained.

The president’s joke about being blamed for the start of the BLM movement touches on previous allegations in the US media, with a number of commentators claiming Moscow had sought to harness or amplify the unrest. The Kremlin has consistently denied being behind the supposed disinformation campaigns.