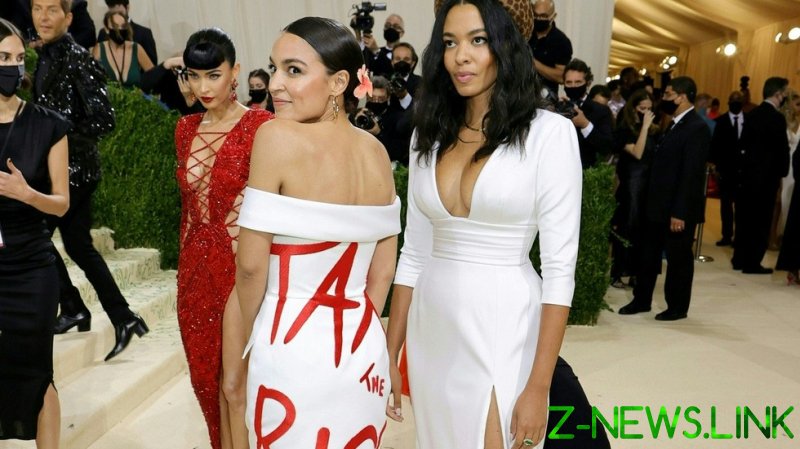 Attending the celebrity-filled Met Gala event while she rages about the coronavirus pandemic regularly on social media was already bad optics for Ocasio-Cortez. Worse, however, is sporting a ‘Tax the Rich’ statement sprawled across the type of dress few Americans will wear at an event fewer will ever attend on top of a government-guaranteed income that puts most working class people to shame.

In true Ocasio-Cortez fashion, she doesn’t care…or understand. It’s difficult to tell with her sometimes. In response to criticism, she posted a video trying to explain that people saying her act was ‘ironic’ actually don’t understand the definition of ‘irony’…

What Ocasio-Cortez has not addressed is the recent controversy surrounding her dress designer. A New York Post report suggests that Aurora James seems to have difficulty paying her own fair share of taxes, not to mention paying workers.

According to the report, she has six IRS tax liens totaling over $100,000 and three open tax warrants in New York for failing to withhold taxes from employees’ checks and failing to carry workers’ compensation insurance.

It’s not just the government getting stiffed either. James has reportedly had trouble paying rent as well, settling a previous eviction action after owing over $25,000 in rent and staying beyond her lease. Another lawsuit from a former landlord also claimed she owed thousands.

Worst of all, James has been described as running a ‘hostile’ work environment, with former employees claiming they faced harassment and were often told to do James’ personal tasks that went far beyond their job descriptions. James has relied heavily on utilizing unpaid interns for full time work, as well.

The new details have only made Ocasio-Cortez’s splashy night look all the worse – she’s also facing an ethics complaint for accepting a free ticket to the fashion event.

The Democrat congresswoman, by the way, must have put at least some research into James, as she sung the praises of the “black woman immigrant designer” previously on Twitter.

Ensuing criticism has mattered to Ocasio-Cortez about as much as the obviously bad optics of attending an event that costs people tens of thousands of dollars to get into, posing for cameras, all the while making your efforts seem like you’re championing the plight of the poor. She just wants to tell us all that we don’t understand the word ‘irony’.

We should be surprised by none of this. Ocasio-Cortez may have begun as a fairly exciting and new kind of politician, but she has become what most politicians actually strive to be, especially in today’s culture: an empty celebrity.

If taxing the rich were truly a concern of the New York Democrat then there are better ways to bring attention to this than attending a star-studded, capitalist event where most people are paying more for tickets than they likely do in taxes. Ocasio-Cortez’s flub has been turned into a narrative about ‘bad optics’ because it was only ever about optics. If it was about anything more for her, the young socialist may have given more thought to vetting out the person designing her actual dress and responsible for the actual messaging. She would have perhaps chosen to spend the time and resources getting photographed and dolled up for cameras on doing actual work to help the very people she so often says she cares about.

It was about none of that. If you need further proof, just watch this ‘behind the scenes’ video taken by Vanity Fair – more optics, more capitalism. It shows Ocasio-Cortez trying on her dress – maskless and indoors – while a room full of masked pions look on and get about two steps away from hitting their knees and bowing to the almighty queen.

Ocasio-Cortez has not responded to the report about her designer, and the honest truth is she doesn’t need to. Even if she does, it will likely just be another catchy and quick Instagram video with an attempt at a catchy takedown that might manage to get some friendly headlines from friendly outlets, hungry to defend her.

Ocasio-Cortez doesn’t care about the poor, and she doesn’t care about the rich, whom she appears to spend the majority of her time with anyway. Like most of the crusty politicians she was so critical of when first running, the Democrat cares about her brand above challenging the actual systems she supposedly opposes. Wearing a ‘Tax the Rich’ dress to a fancy, uber-expensive fashion event is not something that changes minds or closes tax loopholes for billionaires or even sets you up as an enemy of corporatism. It just gets you some pretty pictures, attention from Vanity Fair, and free things most people can’t even allow themselves to dream about. Perhaps it’d be appropriate to tell Ocasio-Cortez to do better, but she’d probably have a staffer look up the definition of ‘better’ and then do some mental gymnastics to explain why she actually is doing ‘better’ already and her critics need to educate themselves to reach her oh-so impressive level.