Home / WORLD / ‘Support, not sanctions’: Turkey’s Erdogan dismayed at US punishing its NATO ally for purchasing S-400 system from Russia

‘Support, not sanctions’: Turkey’s Erdogan dismayed at US punishing its NATO ally for purchasing S-400 system from Russia 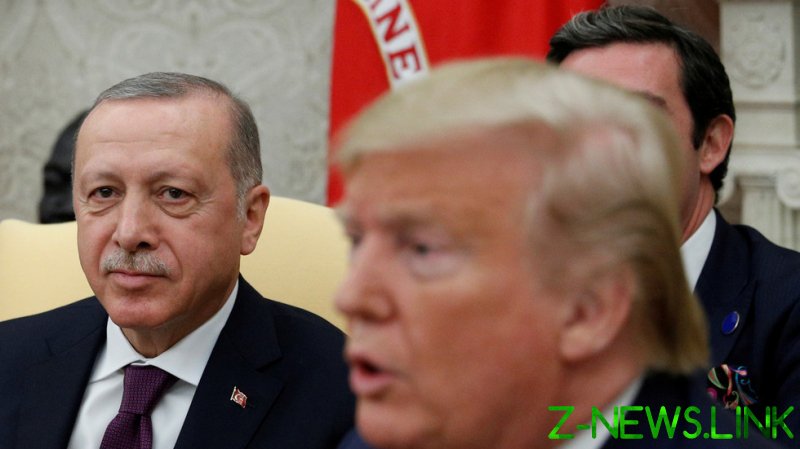 In a speech on Monday, Erdogan said that Turkey would not be deterred in defending itself by either US sanctions, or those agreed by the EU in response to the country’s gas drilling in Mediterranean waters claimed by Cyprus.

“We expect support from our NATO ally, America, in our fight against terrorist organizations and forces … not sanctions,” Erdogan said.

The US announced sanctions against Turkey’s Presidency of Defense Industries (SSB) on Monday over its procurement of the S-400 anti-aircraft missile system, as well as an asset freeze and visa restrictions on its chairman.

Secretary of State Mike Pompeo said that the US “will not tolerate significant transactions with Russia’s defense and intelligence sectors,” adding that he “urged Turkey” to “resolve the S-400 problem immediately.”

A spokesperson for the Turkish Foreign Ministry said that Ankara “condemns” the sanctions and said allegations that its new weaponry could jeopardize NATO systems are “devoid of any technical merit.”

They added that Ankara would “take the necessary steps” against what it called a “grave mistake” by the US, while also claiming that President Donald Trump had previously repeatedly admitted that Turkey’s acquisition of the S-400 was “justified.”

For some time, the US has attempted to deter Turkey from its deal with Russia, claiming concerns it could destabilize NATO, and previously blocked the delivery of F-35 fighter jets to the country over it.

Meanwhile, Turkey was last week placed further at odds with other NATO allies, including Greece and France, over the EU’s decision to approve limited sanctions against Turkish officials over its gas drilling, with more details to be published in the coming weeks.

Greek government spokesman Stelios Petsas on Monday said the EU was taking “slow, albeit steady, steps” against Turkey “to end its illegal and provocative behavior.” Athens has called for an arms embargo on Turkey, but the EU’s proposed measures are only against energy individuals linked to its activities in the Eastern Mediterranean and don’t target the Turkish economy.