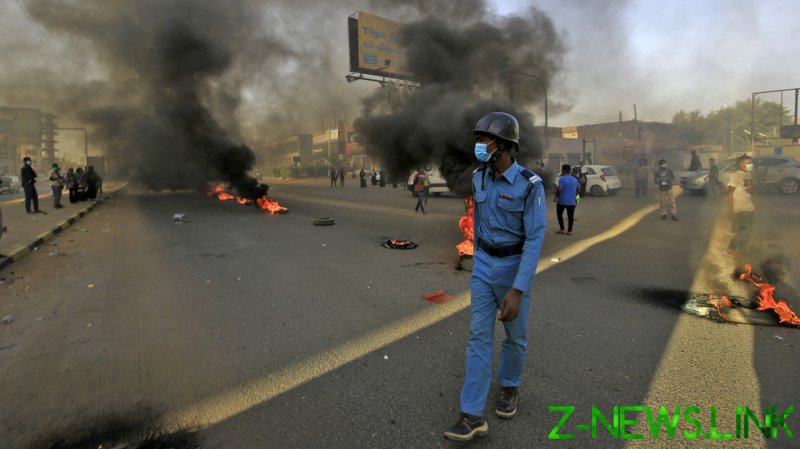 Early in the day, demonstrators built barricades to cut off major roads and bridges in the city of more than 5 million. The Mec Nimr Bridge, which links the downtown with Khartoum’s other areas, was also blocked. The actions of the protesters resulted in traffic jams across the city, with its key artery, Nile Street, affected the most.

Police were soon deployed to restore order, with officers using tear gas to disperse the crowds.

Videos from Khartoum shared on social media show police firing canisters of tear gas and demonstrators retreating from the scene.

Police dismantled the barricades, allowing normal traffic to be restored on the first work day of the week.

The unrest follows events on Saturday when pro-military protesters tried to storm the headquarters of Sudan’s state-run news agency, causing a delay of a news conference by activists supporting Prime Minister Abdalla Hamdok and the interim government, called the Sovereignty Council, which appointed him.

During the week, Khartoum saw major rallies of supporters of civilian rule, as well as backers of the generals, with hundreds of thousands taking to the streets.

The North African nation is currently going through a rough transition phase following the ouster of longtime leader Omar al-Bashir and his Islamist government in 2019.

Tensions have been on the rise in Sudan after a group of army generals, said to be al-Bashir loyalists, attempted to seize power last month from the interim government, which includes both civilian politicians and military representatives. The Sovereignty Council is currently led by a general, but the top post is expected to be handed over to a civilian later this year. The failed coup underlines the split in Sudanese society amid food shortages and the harsh economic situation.

Supporters of civilian rule want the transitional government to fulfill its task of reforming the political system and paving the way for a general election in 2023.

But backers of the generals have labeled the current cabinet ‘the hunger government’, blaming the country’s troubles on their corruption and incompetence. They insist that only military rule will be able to get the country back on track.

Also on Sunday, Sudan’s energy minister halted the entry of ships carrying fuel into its territorial waters, in a move that may bring even more problems to the crisis-hit nation. The ban was introduced to avoid fines for offloading delays as protests by Beja tribes in eastern Sudan prevented the country’s main ports from operating.