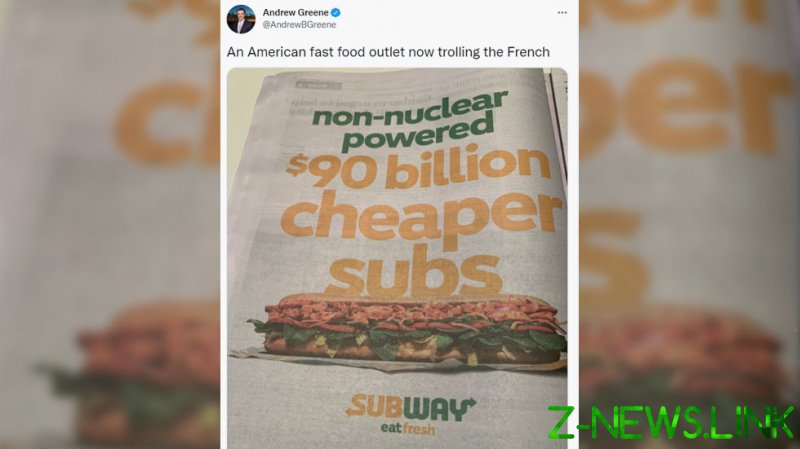 In a full-page advert published in The Age newspaper on Saturday, Subway boasted that it had “non-nuclear powered” subs which were “$90 billion cheaper” – a dig at the bloated cost of Australia’s submarine deal with France, before Canberra backed out in favor of acquiring nuclear-powered submarines from the US.

Though many social media users found the advert to be clever and funny, others found it to be “disgusting” and disrespectful.

“Guessing the French @SUBWAY market is zero interest to them…” one user wrote, while another questioned, “Want to be boycotted in France?”

One user even accused Subway’s “revolting” advert of “using [the] concept of mass death to sell a snack,” considering how close to war China, Australia, and the US appear to be.

France recalled its ambassadors from both Australia and the US on Friday in response to what it described as “unacceptable behavior between allies and partners” as a result of the AUKUS (Australia, United Kingdom, United States) deal.

French President Emmanuel Macron was reportedly only informed of Australia’s decision to withdraw from the two nations’ 2016 submarine deal immediately before the news became public.

Jean-Yves Le Drian, the French foreign minister, called the decision a “stab in the back,” warning that “the consequences of which affect the very conception that we have of our alliances, our partnerships and the importance of the Indo-Pacific for Europe.”

Australia justified the withdrawal from the deal with France by claiming that the cost had become higher than originally anticipated.