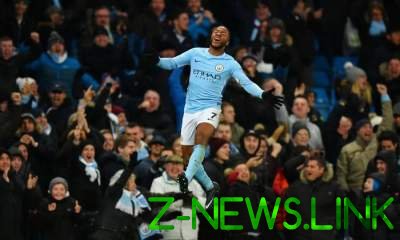 Completed the 14th round of the championship of England football.

Raheem sterling second round in a row saves Manchester city from losing points. In the home match against the “Southampton” the ex-midfielder “Liverpool” in the last minute of stoppage spectacular passing shot brought the bulls a 13th win in 14 matches.

Chelsea the whole match hung on the gate, “Swansea”, but the threat of failure hovers over Stamford bridge before the final whistle. The three points of the defending champion brought a goal, the German Central defender Antonio rüdiger.

Crushing victories in the 14th round was marked “Arsenal” and “Liverpool”. The gunners in the second half, smashed Huddersfield and Liverpool to the pitch Mohamed Salah finished off Stoke city.

Wayne Rooney in a match with “West ham” scored the first hat-trick since 2011. One of the goals the striker Everton scored a hit with his half of the field, taking advantage of a mistake the experienced Joe HART.