Subaru introduced the biggest crossover in the history of the company 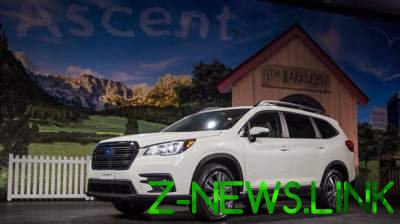 Company Subaru at the motor show in Los Angeles introduced the largest crossover in the brand’s history — Ascent.

The car is available in seven – or eight-seat cabin configuration, is equipped with the new turbocharged “opposition” power of 260 horsepower and control system of the thrust vector from the “charged” sedan WRX and WRX STi.

At the core of the crossover lies stretched version of the Subaru global platform with a new integrated subframes, reinforcements in the joints of the structural elements and independent suspension. Overall length is 4998 mm, width — 1930 mm, height — 1819 mm, and wheelbase is 2890 mm. For its size the car is close to Toyota Highlander and Mazda CX-9. Ground clearance Ascent reaches 220 mm.

Crossover Ascent was the first Subaru model equipped with the new four-cylinder “oppozitnik” volume of 2.4 liters. The engine produces 260 horsepower and 376 Nm of torque. The unit has turbocharger with twin-scroll, direct injection system control valve timing and valve lift. Box — CVT with manual shift and the simulation of eight steps.

Drive symmetrical all complemented by off-road mode of operation the control electronics X-Mode and help system during the descent. In addition, the model has Active Torque Vectoring, which first appeared on the WRX STI. It selectively brakes the front wheels, helping to turn a car in a turn.

The basic version of the Ascent is eight, however, expensive versions for the model, you can order two separate seats in the second row. Rear door for easy access to the compartment open at 75 degrees. The list of standard equipment for the Subaru Ascent comes with automatic emergency braking system, a multimedia system with 6.5-inch display and support for Apple CarPlay and Android Auto, three-zone climate control, four USB ports, 19 Cup holders and bottle holders.