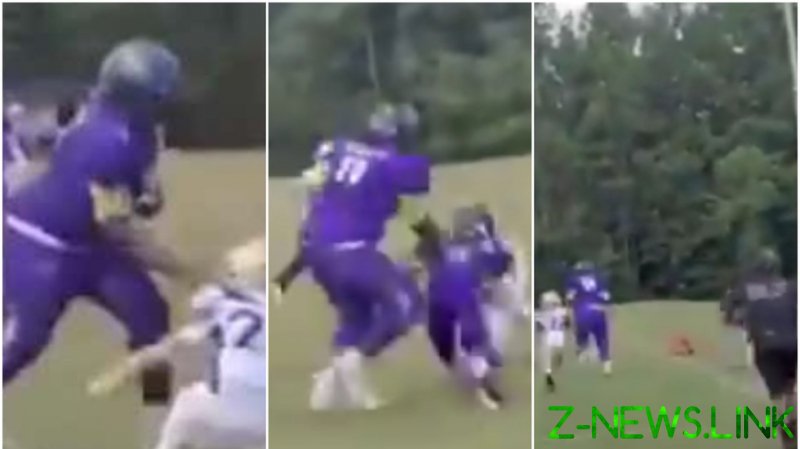 Dwarfing his teammates and rivals as he waited to receive possession, the purported child proceeds to pummel through the opposition defense and towards the line on a charge forward that would give any player of that age little hope of stopping him.

Fans said that the wide receiver had activated “beast mode” and likened him to the likes of Quincy Patterson II, the Georgia Tech prospect known for carrying more than 17 stone across his 6ft 4in frame.

Produced by a Twitter account called “Football is Life”, the clip claimed that the early bloomer was 6ft 2in tall – the same span as the average NFL player, according to previous surveys of player height and weight.

“Back in my days, if a kid was over 135lb they weren’t allowed to carry the ball,” said one viewer, leading to a debate around whether limits should be imposed in the interests of fairness.

Another argued: “I hope he continues to have positivity with his height and talent and not what my son had to experience with basketball in a stupid community center league.

“[They said], ‘with him being that big, he is a risk to hurt kids in this age bracket.’ He plays spring and fall sports with the same kids.”

Some were reminded of early footage of Andy Reid, the Kansas City Chiefs head coach who has also been in the headlines this weekend after his team’s NFL game against the New England Patriots was postponed over a series of positive Covid-19 tests.

Reid was famously filmed looming over his fellow 13-year-olds while taking part in a youth competition at half-time of an NFL game that was broadcast on live television in the US in 1971.

There were also questions over whether the youngster really was his suggested age and concerns expressed for the safety of the other team.

“[I’m] impressed with his ridiculous size. [He’s a] total freak, and will probably play in the NFL one day.

“But running over kids weighing a quarter of his size is not really beast mode, in my opinion.”