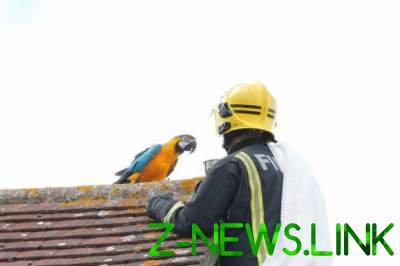 The female parrot named Jesse, who could not descend from the roof of a house in London, swore at came to the aid of firefighters. When one of the rescuers went up to the bird up the stairs and said “I love you” (he explained that the way to win her affection), Jesse replied, “I love you.” And then added: “Go on ***”.

Jesse ran away from his home and for three days sat on the roof of a neighboring house. Its owners and representatives of the Royal society for the prevention of cruelty to animals were unable to persuade the bird to come down, and, fearing that the parrot is injured, called the fire Department.

See also:  Curiosity of the day: the woman found out about the cheating spouse from the parrot

“We found that bird loves to swear, and swearing amused us. Jesse also spoke in Turkish and Greek, so we called her in those languages,” – said the head of the fire brigade, Chris swallow falls.

It soon became clear that the parrot is in order: Jesse in front of the fire flew to another roof, and then a tree. She later returned to the owners. In the video, recorded after returning home, the bird modestly confesses his love to the rescue.

See also:  Pics of the kids cheer the saddest