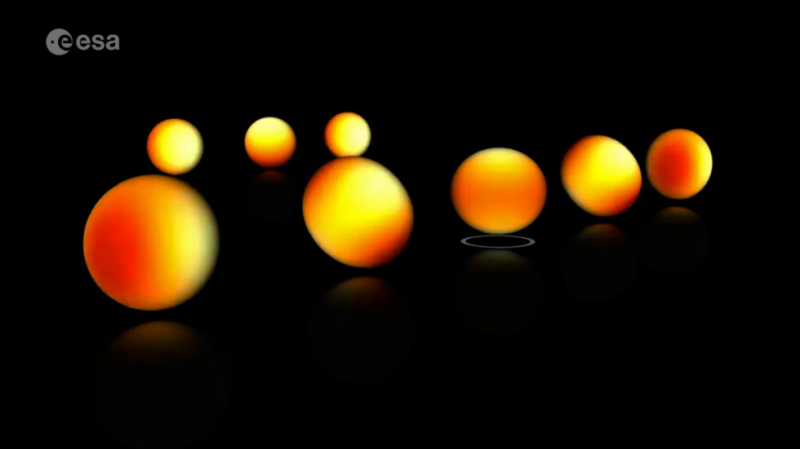 A trove of data collected by the European Space Agency (ESA) through its Gaia space observatory was released on Monday, revealing “starquakes” on thousands of stars across the Milky Way galaxy.

Astronomers say the phenomenon is more like a stellar-scale tsunami than earthquakes which shake the crust of the planet, as main sequence stars have no crusts (although neutron stars can undergo extremely powerful quakes).

The newly observed oscillations provide a hint of what is happening under the star’s surface, analogous to the way seismologists use tremors on Earth to deduce its internal structure.

Astrophysicist Conny Aerts, a member of the research team, said: “Gaia is opening a goldmine for ‘asteroseismology’ of massive stars.”

The ESA has released a video showing the “sounds” of the starquakes. Rather than actual soundwaves, they are a “sonification” of the data collected by the space probe and its two telescopes.

“We artificially multiplied them by a big factor of 8.6 million to bring them into the audible range of [human] ears,” Aerts explained during a press conference on Monday.

Gaia is an ESA spacecraft that floats at the Earth-Sun Lagrange 2 point. The spot, located around 1.5 million kilometers from Earth, is constantly shielded from solar radiation by the shadow of our planet, while the gravity of the two bodies is balanced by the centrifugal effect. It allows Gaia to collect data without the Sun’s interference and maintain its position using just a small amount of energy.

The space observatory was launched in 2013 and is tasked with mapping our galaxy in extreme detail. The observation of “starquakes” is a subset of the third release of data collected by the mission. The dataset includes chemical compositions, stellar temperatures and colors of the surveyed stars. It also includes the largest yet catalog of binary stars, thousands of objects in our own system, and other scientific information.

“Unlike other missions that target specific objects, Gaia is a survey mission. This means that while surveying the entire sky with billions of stars multiple times, Gaia is bound to make discoveries that other more dedicated missions would miss,” Timo Prusti, Project Scientist for Gaia, remarked.