Home / WORLD / Strained relations between US & Russia could soon be on mend, Moscow says, despite key meeting with Biden’s envoy breaking down

Strained relations between US & Russia could soon be on mend, Moscow says, despite key meeting with Biden’s envoy breaking down 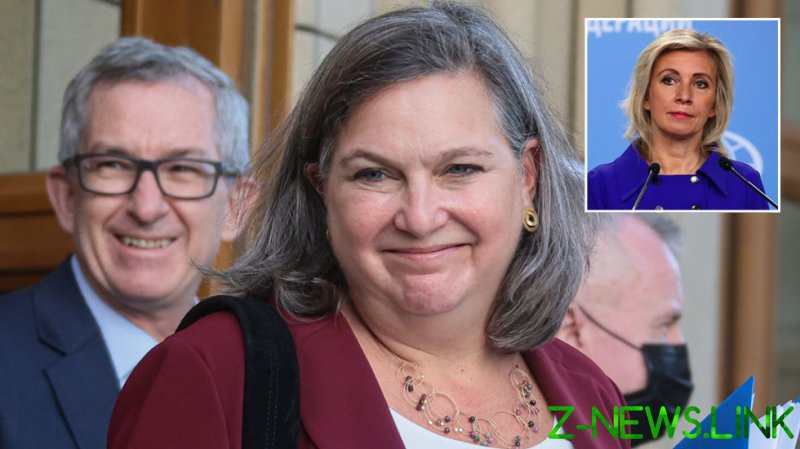 On Wednesday, Foreign Ministry spokeswoman Maria Zakharova said the US had “taken stock” of a number of outstanding issues between Russia and the US, and that there was now an understanding of the stickiest issues hindering the countries’ bilateral relations.

“Of course, no one expected that some enchanting event would happen,” she said. According to Zakharova, Victoria Nuland, the US undersecretary of state for political affairs, “has no authority to resolve all the outstanding obstacles at once.”

“At the same time, we took stock of problematic issues that need to be solved before we can move forward even in principle,” she told the Zvezda news channel.

“I cannot reveal everything, after all, these are negotiations behind closed doors. The only thing I can say is that there is some progress on some issues. Not a solution to these issues, not a solution to the fundamental problems, but there are some elements of progress,” she claimed, adding that “the most important thing is that, in general, it seems to me, Victoria took with her to Washington a rather long list of those issues that were identified by the Russian side for the need to resolve them as soon as possible.”

Nuland arrived in Russia on Monday to hold three days of discussions with the country’s officials. Just a day later, negotiations appeared to be floundering, as talks between the US diplomat and Moscow’s deputy foreign minister, Sergey Ryabkov, broke down without achieving much progress.

Following the meeting, Ryabkov argued that the US side was not listening to Russia’s demands, and that tensions between the two nations could even be worsened by the impasse.

“I cannot say that we have made great progress. The topics of visas, the operating conditions of diplomatic missions, the rotation of diplomatic staff, the overall normalization of the activities of Russian foreign missions in the United States and the United States in Russia retain a significant crisis potential, and it cannot be ruled out that some further exacerbations are possible in these areas,” he said.

However, on Wednesday, the negotiations took a turn for the better, with Dmitry Kozak, the Kremlin’s deputy chief of staff, saying that “a thorough and constructive dialogue took place regarding the settlement of the conflict in south-east Ukraine.” Nuland also described the meeting as “productive” and “useful,” as both sides saw eye-to-eye on the need for Kiev to implement the controversial Minsk agreements to create peace in the region and for Ukraine’s Donbass region to be given special autonomous status.

As the talks began, Ryabkov said Moscow did not want tensions between Russia and the US to escalate further, asking for sanctions and international restrictions to be removed. On the agenda were issues concerning the missions of Russia and the US on each other’s territories, with Ryabkov’s side emphasizing that anti-Russian actions must be addressed, but that the Kremlin does not want to see relations deteriorate further.

Tags between could despite Moscow relations Russia strained