Home / WORLD / Stop worrying and love the mob: Democrats would rather see homicide surge than bring back ‘racist’ cops

Stop worrying and love the mob: Democrats would rather see homicide surge than bring back ‘racist’ cops 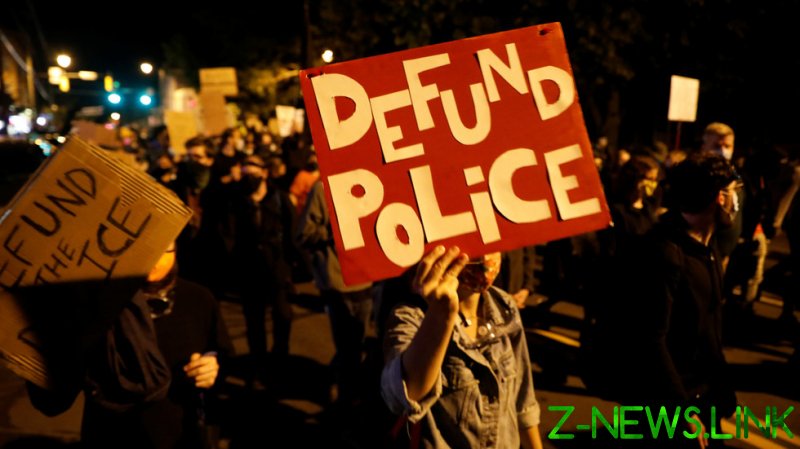 A preliminary look at violence and murder rates for 2021 shows that the American people have much more than just a pandemic to contend with.

In Portland, Oregon, for example, which is experiencing a soft sort of anarchy to this day following the killing of George Floyd on May 25 last year, there was a 255% surge in murders (71, to be precise) between June 2020 and February 2021. In the same period, reported shootings in the once-laid-back liberal city jumped 17% to 551.

Meanwhile, over in Chicago, yet another Democratic warzone, the numbers look more like a snapshot from Baghdad circa 2003 than that of the third most populous US city. In March alone, there were 233 shooting incidents and 298 shooting victims, according to data from the Chicago Police Department. This compares to 146 shootings and 175 victims in March 2020, and 136 shooting incidents and 165 victims in 2019. Homicides in the city were up 33% in the first three months of this year compared with the same period in 2020.

Now try to imagine serving as a police officer in one of these cities, where being branded a ‘racist’ is the gratitude. But I digress.

Incidentally, Portland and Chicago are not isolated examples of systemic American violence. In Minneapolis, for example, where the murder trial of Derek Chauvin, the police officer accused of killing George Floyd, is underway, homicide rates are up by some 30% since the same period last year. Seattle, meanwhile, is trying desperately hard not to best last year’s bloodbath, when the murder rate reached 50 – the highest figure in 26 years.

Is anyone really surprised that the very same cities that coddled the mob during last year’s fervent ‘summer of love’ are now witnessing out-of-control violence and murder?

Briefly – for those who may have forgotten what sort of madness has infected the left side of the American brain – rewind to last summer when Portland was burning. The city’s mayor, Ted Wheeler, in an effort to pacify the Black Lives Matter and Antifa demonstrators during the “mostly peaceful protests,” eliminated the city’s Gun Violence Reduction Team in favor of deploying crack social workers armed with only name badges and smiles, to respond to “mental health crises.”

How did the mob respond to that act of charity and mercy? Exactly as one would expect a mob to respond. Around the time of Wheeler’s birthday, the vandals got together and almost torched the mayor’s deluxe condominium to the ground whilst singing “happy tear gas to you.”

But it gets better. Instead of the mayor using the occasion to accept then-President Donald Trump’s offer of federal troops to crack some soft skulls, Wheeler bowed to the mob’s midnight demands and ordered his police to stop using the noxious tear gas, the most effective non-lethal munitions available to law enforcement. Needless to say, the violence did not stop then, no more than it has stopped now.

For those few liberals still in full possession of their mental faculties, and who can add 2+2 without coming up with a non-racist 5, it is possible to deduce that going soft on street thugs, while culling the cops, is the real problem plaguing Democratic cities today.

That much was underscored in a recent editorial by Oregon’s largest newspaper, the Oregonian, which issued an apology for supporting last year’s “defund the police” campaign. Although the muted mea culpa was buried near the bottom of the piece, it was still a significant gesture, not least because the media rarely acknowledges their mistakes these days.

Speaking about Portland’s move to disband the above-mentioned Gun Violence Reduction Team, the paper acknowledged that “[W]hile we supported the move at the time, we – and all Portlanders – should recognize what has also been lost.”

Clearly, the newspaper is attempting to resurrect support for armed police at a time when homicides in Portland are “occurring at a pace to reach a record-busting 100 this year.” Mayor Ted Wheeler, who voted to liquidate the elite unit to pacify the left, has painted himself into a Catch-22 that would confound even the Great Houdini. Without a heightened police presence, street violence and murder will continue unabated; yet hiring more police will make him the target of the social justice warriors who tend to look at law enforcement with the same disdain as the Ku Klux Klan.

So how does Portland’s City Council plan to respond to the wave of violence? By forking over millions of dollars to “community organizations” to oversee the work of unarmed park rangers – yes, park rangers – who will be tasked with patrolling city parks and outlying neighborhoods. The only thing missing from this liberal fever dream is Smokey the Bear pleading with protesters not to torch homes and businesses. Assigning policing duties to park rangers – who have zero power to perform arrests – is no different from a city building a firehouse that has no access to water supplies.

What is most disturbing about this entire farce, this clown show of government incompetence, is that Portland, like so many other Democrat-run cities, is acting on the belief that American police officers are part and parcel of the ‘systemic racism’ that has run roughshod over the nation. As anyone aside from the mainstream media knows, ‘systemic racism’ is undoubtedly the biggest fraud to be foisted upon the American psyche since Russiagate.

Although it is not unreasonable to suggest that there is a tiny minority of racists among the thousands of people who wear a badge, to suggest that the majority conforms to such an attitude is preposterous, unproven, and without any basis in reality. Yet that is the drumbeat that the woke mob has set for Democratic leaders, who either dance to the tune or suffer defeat on election day.

Meanwhile, average citizens are forced to live in increasingly violent communities without due recourse to an effective police presence.

Perhaps former NBA star Charles Barkley expressed it best when he asked, “Who are black people supposed to call – Ghost Busters? – when we have crime in our neighborhood? We need to stop the defund or abolish the police crap.”

Such wisdom flushes with that of average Americans, who overwhelmingly reject the idea of abolishing police departments. According to a poll conducted by Gallup, just 1% of Republicans support such a move, versus 27% of Democrats and 12% of independents. In other words, crime-hit Democratic cities, like Portland and Chicago, better wake up and smell the coffee fast.

Just because the woke mob may not agree to armed police on the streets, the overwhelming majority of Americans from across the political spectrum absolutely do. The Democrats need to recognize that reality before it’s too late.