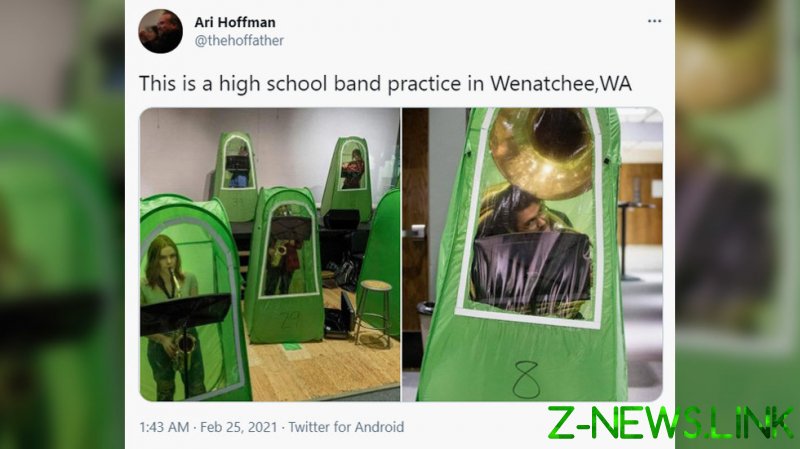 The Wenatchee High School children have been back at school since January 26, however with strict coronavirus measures in place.

Photos posted on Wednesday by local newspaper Wenatchee World showed the young musicians awkwardly confined to their small, green, socially-distanced tents as they tried to play their instruments, prompting many to ridicule the situation.

“This is what happens when parents can’t or won’t draw a line,” commented one social media user. While TV host Bill Spadea wrote, “WTF are these cowardly and ignorant adults doing to an entire generation of kids? When will we hold the school administrators accountable for this insanity.”

Others called the display “taxpayer funded child abuse” and “madness,” and questioned whether schools should even be opening if such drastic safety measures are required.

Some Americans, however, came out in support of sealing up the band kids.

“I applaud their efforts of maintaining their standards while still trying to adhere to safety. While it may look ridiculous, these kids wouldn’t do it if they didn’t want to,”  reacted one user.

The reopening of schools in the United States has varied by state.

Back in December, President Joe Biden pledged to open the majority of schools in the first 100 days of his term.

Biden himself has called it “a national emergency” that about 20 million US children have been kept out of classrooms for nearly a year. Deprived of socialization and normal school activities, vulnerable children are at a higher risk for suicide. NRP reported earlier this month that hospital providers in at least seven states across the country reported a surge in admissions of suicidal children.

The CDC has said that schools can safely reopen, even without teachers first being vaccinated.