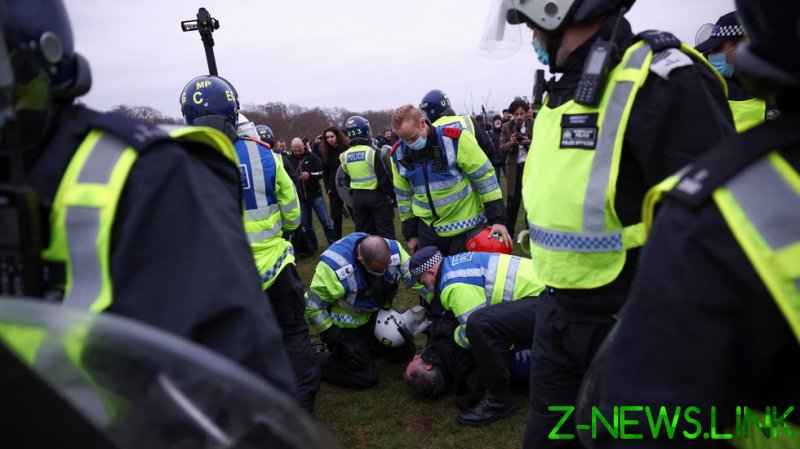 The anti-lockdown rally started as a peaceful march on Saturday afternoon, under the watchful eye of hundreds of police, but eventually turned ugly after the officers began detaining people while the protesters actively resisted and some even pelted them with bottles.

Sporadic scuffles reportedly dragged into the night as smaller groups refused to disperse and go home.

Piers Corbyn, the 73-year-old brother of former Labour leader Jeremy Corbyn and a vocal lockdown and vaccine critic, gave a heated speech in Hyde Park before police broke up the gathering and the protesters proceeded to march through London streets.

In defiance of the ban on mass gatherings, mask mandates and other restrictions, protesters – including families with children – chanted slogans such as ‘Freedom!’ and ‘We don’t consent!’, and carrying banners that read ‘Stop destroying our kids’ lives!’

While authorities have yet to provide an estimate of the number of participants, local media reports and videos from the scene suggest that thousands of people marched through London, and even police acknowledged that “more people than previously expected” showed up.