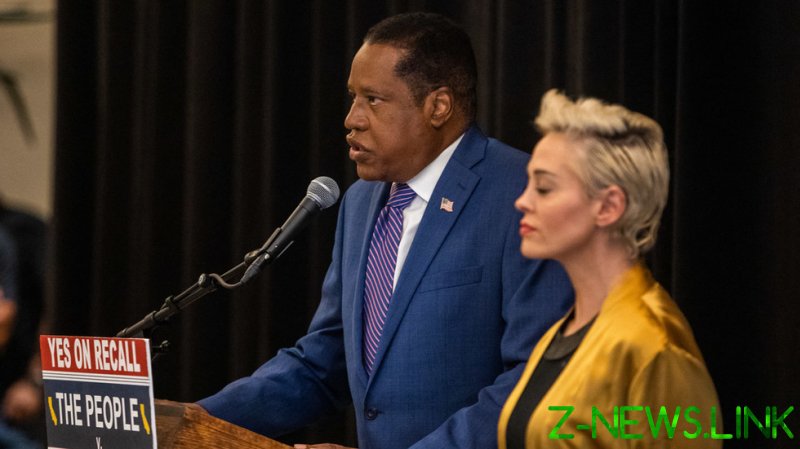 “I did not slam BLM. I slammed arrogant white people for thinking black people give an F about them mattering to white liberals or racists,” McGowan said, reacting to Fox News coverage of her joint media conference with California gubernatorial candidate Larry Elder. The news article she was angry about was headlined “Rose McGowan slams Black Lives Matter alongside Larry Elder: ‘He might just know more than you.’”

McGowan endorsed Elder’s candidacy to replace incumbent Governor Gavin Newsom, should he be removed from office in the upcoming recall election on Tuesday. She said that while the black conservative radio host and she differed on many policy issues, she believed him to be someone who genuinely wants to make life better for ordinary people. Meanwhile, Newsom has long been part of the entrenched establishment preserving the rotten status quo for personal gain, she said.

The issue of Black Lives Matter was brought after Elder rebuked the Democratic party for “playing the race card” to boost the black vote, which he said went against progress in civil rights.

“Racial justice, that’s what this party is all about. And they divided this country,” he said. “We have far more in common than we have apart.”

Elder said after electing a black person for president, Americans “can now deal with people based on the content of character, not the color of skin. Instead Democrats have doubled down… on things like Critical Race Theory and reparation.”

As she supported the sentiment, McGowan predicted that “mostly white people who work in the media will disavow that. But understand who it’s coming from and that he just might know more than you living in a different skin.”

“Most people don’t want to hear that. They want to hear that the more we micro-label each other, the better we’ll be,” she added. “If you truly want to get past racial barriers, be fair in coverage. Be honest.”

McGowan sees American society as deeply corrupted, with powerful elites deliberately keeping the common people ignorant and divided so that they can be preyed upon with ease. Much of the activism ostensibly promoting racial justice is part of this system, she believes, treating people of color with condescension and pitting them and working class white people against each other.

A vocal critic of both major parties in the US, McGowan previously took flack from the Left for going to Fox News to denounce both Democrats and Republicans. The news channel is perceived as a dishonest mouthpiece of the GOP by many Democrats, so a person who gets involved with it, regardless of their past, gets instantly flagged as an enemy by the blue camp.

During the conference with Elder, McGowan called out this treatment, saying the left failed to see the partisanship of their own media sources. “You are a part of it,” she said, addressing journalists, when talking about a “dirty fight” against Elder’s candidacy. Elder was branded “the black face of white supremacy” by hostile media during the campaign.

“It does not make it OK that the New York Times has 98.5% of its readers identify as Democrats. But people yell about Fox News that only the Republicans are watching, right?” McGowan noted.

The newspaper’s audience is strongly left-leaning, though not necessarily to the extent that McGowan stated. A Pew poll last year showed that 91% of people, who considered the Times their primary news source, were Democrats. The same metric for Fox News and Republicans was 93%.

During the conference, the activist repeated her earlier accusations against Siebel Newsom, the wife of the incumbent governor, saying she participated in an effort to silence her about disgraced Hollywood producer Harvey Weinstein. McGowan helped expose Weinstein as a sexual predator, which gave rise to the MeToo movement, but not before enduring a lengthy campaign that Weinstein launched to spy on and discredit her.