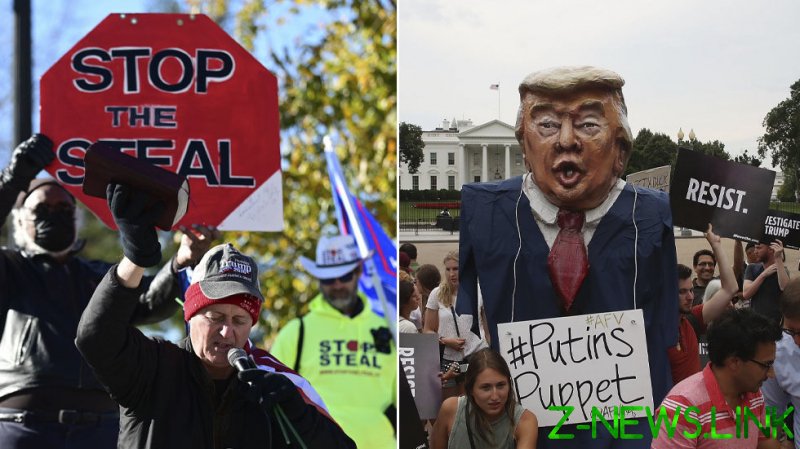 The Trump campaign has now lost 51 legal challenges to last month’s presidential election results, as each state’s authorities confirm rival Democrat Joe Biden’s victory. Yet 52 percent of Republicans actually believed that it was Trump who had “rightfully won” the election (versus 29 percent for Joe Biden), according to a Reuters/Ipsos poll taken in November.

The US isn’t at its first rodeo with the refusal of the losing party to gracefully accept defeat.

In 2016, when Democratic candidate Hillary Clinton lost to Trump, it was the Democrats’ turn to evoke a bogeyman in an attempt to delegitimize the result. Much like in this year’s “stolen election narrative,” the entire world witnessed the anti-Trumpers four-year crusade.

The worst thing about both cases is the number of people who persist and double down on their convictions even as mounting evidence suggests their beliefs are unfounded. When the Mueller Report found, for example, that outside of a few ads purchased on social media by some online ‘trolls’ purported to be Russian, evidence of actual Russian electoral influence was lacking, there were nonetheless those who were so convinced of the narrative that they bunkered down with like-minded individuals in much the same way that the ‘stolen election’ proponents are doing now.

The question is, why is this sort of thing occurring with every US election? What has happened in American society to foster these routine hysterics?

Erosion of trust in political institutions over many years – government lies that start and perpetuate wars, for example, only for people to later realize they’d been manipulated – has created a vacuum of credibility and authority that has been filled with false prophets who preach only to the converted.

These thought leaders, media figures, or just random influencers, find their way into people’s minds and homes via TV, social media, and smartphones. Their messages are simple, polarizing, ideological, and self-serving in an era where the craziest and most radical ideas literally pay via online monetization in a constant contest to rise above the noise. They camp out extreme positions and are rewarded with amplification of their message and further increases in their influence and reach.

Trump, for example, has often mentioned in televised interviews and via his own Twitter account those who have carried his water. Twenty years ago, it would have been the equivalent of the American president plucking a ranting lunatic conspiracy theorist from a street corner and showing him off at events and photo ops.

Also, again, it’s institutional erosion – this time, a lack of faith in media institutions – that has led to many Americans turning elsewhere for something they feel they can trust. It’s the same principle that underpinned Fox News’s success, now taken a few steps further. The Republican half of America long ago grew distrustful of the media, the majority of which has long been objectively qualified as ideological liberal. But now that Trump has been repeatedly critical of Fox for not being sufficiently in lockstep with his personal agenda, other alternative outlets and figures have filled the ideological needs of those looking for confirmation of their pro-Trump worldview, which is no longer defined as conservative but rather whatever Trump’s agenda happens to be at any given moment.

In 2016, when Americans who backed HIllary Clinton felt they had been cheated, zealots among the losing faction spent the next four years trying to tie Trump to a foreign entity in an effort to discredit both. Now that these same individuals find themselves on the “winning” side of the election with Trump’s defeat, they’re (rightfully) chastising their equally radical opponents who are doing the exact same thing that the anti-Trump zealots did in 2016.

The big difference is that the foreign interference argument doesn’t have much traction this time around, so they’re forced to look inward at their own system for conspiracies. The conspiracies are as ridiculous now as they were then. But that hasn’t stopped the self-radicalization of Americans who cling to their favorite “thought leaders” and refuse to entertain opposing views.

America is in desperate need of radical centrists – people who personally hold ideological views, but who are nonetheless capable of critical thought and reasonable analysis. These people need to be actively promoted, if only as a public service. Because, left to their own devices, there are increasingly fewer Americans who will even entertain the notion of reasoned debate and analysis. But without it, the US is heading for the kind of polarization and unrest more characteristic of failed states than a global superpower.