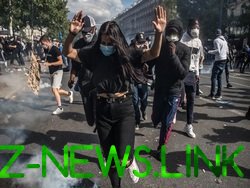 On anti-racism protests in the capitals of Britain and France were clashes of protesters with the police.

In Paris and London on Saturday, June 13, held a major protest against racism and police violence.

According to TV channel BFM, on Republic square in the French capital were about three thousand people.

The majority of participants of the action held posters with the slogan black Lives have value (Black lives matter), and also condemning the police.

They also called to investigate the death of Adama Traore − the black Frenchman who died two hours after the detention by gendarmes in July 2016 under still disputed circumstances.

During the demonstration a group of people dressed in black and with covered entities rioted, throwing stones at police and bottles. In response, the militiamen fired tear gas.

During the demonstration, was detained 26 people.

Also riots and clashes with police ended with a campaign against racism in Marseille.