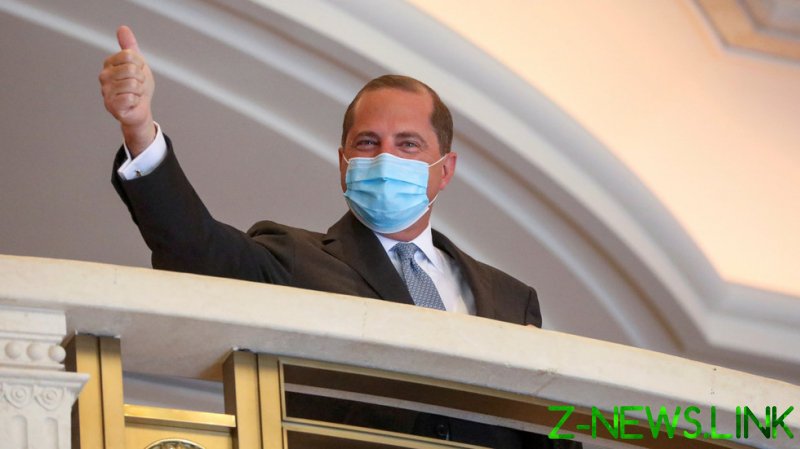 CNN picked up Azar’s departure letter – a standard practice for all outgoing officials ahead of a presidential transition – on Friday, reporting that the secretary was resigning his position over Trump’s post-election rhetoric and his response to the unrest on Capitol Hill. Azar, however, has countered that claim, stating he will remain at his post until Joe Biden’s inauguration on January 20.

“Contrary to the CNN chyron, I am still here serving the American people at [Health and Human Services]. I believe it is my duty to help ensure a smooth transition to President-elect Biden’s team during the pandemic and will remain as Secretary through January 20,” Azar wrote on Twitter on Friday night.

While Azar does cite the Capitol riot in his letter, deeming it an “assault on our democracy,” and calls on the president to “continue to condemn unequivocally any form of violence,” the missive does not suggest any break with Trump over the unrest. Instead, the secretary wrote that “the actions and rhetoric following the election threaten to tarnish [the] historic legacies of this administration,” without levelling any accusations at the president himself.

The riot in DC has brought down a series of allegations on the president over his response to the unrest, with Democratic opponents alleging he “incited insurrection” in a new impeachment bid. Trump, however, has repeatedly denounced the violence seen last Wednesday. The White House blasted the rioters’ behavior as “appalling, reprehensible, and antithetical to the American way” last week, while Trump himself has deemed the incident a “heinous attack,”reiterating that message on numerous occasions since.

While Azar’s letter did not mark a typical resignation, a series of Trump officials have left their posts in the wake of the riot, among them Transportation Secretary Elaine Chao, Education Secretary Betsy Devos, acting Department of Homeland Security head Chad Wolf, as well as lower-level staffers such as Deputy National Security Advisor Matthew Pottinger and White House Deputy Press Secretary Sarah Matthews.