Home / Movie / Stephen king refused the title of “man of the year”?

Stephen king refused the title of “man of the year”?

So, Stephen king wrote that famous magazine TIME have expressed a desire to choose its Person of the year. However, the King of Horror refused. Why? He didn’t want to be photographed with Pennywise on my knees!

TIME wanted me to be their Person of the Year, but I said no! Won’t pose with Pennywise the Clown on my lap! Sorry, TIME! Sad!!!
— Stephen King (@StephenKing) 25 Nov 2017

Maybe king tired of the hype over the recent film adaptation of “It”? What? Imagine how many failed cosplays Pennywise he has seen over the past Halloween!

Okay, this tweet is still most likely was a joke. Luckily, at latest time the old man uses Twitter only to once again pry the current US President Donald trump, who TIME declared Man of the year. Everyone has a good time as you can, right? Update just in case that this title is not considered the seal of approval or honour. The editorial Board chooses a kind of person the past year, pleasant or not. Adolf Hitler , too, was splashed on the cover of TIME in its time.

But you know, I think many would agree that for us, fans of horror, expiring 2017 do, and in all seriousness was marked by Stephen king. Of course, the lack of adaptations in General, he can not complain, however, in recent months such big and curious as the premiere of “the Dark tower”, “Gloom”, “Mr. Mercedes,” “Gerald’s Game” and of course “It” again and again attracts our attention. Let many do not meet our expectations, but others have done it with a vengeance. And most importantly, the author’s name did not cease even for a moment.

10 of the scariest monsters by Stephen king 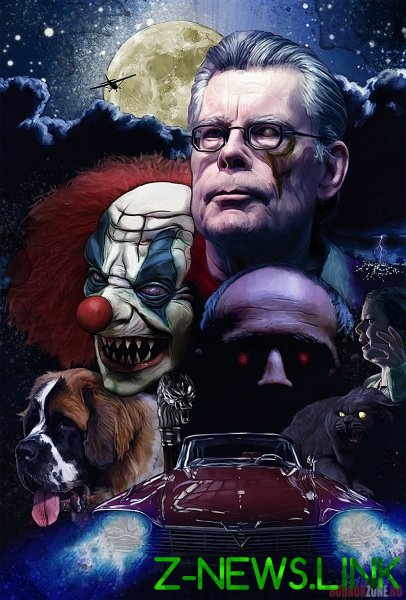