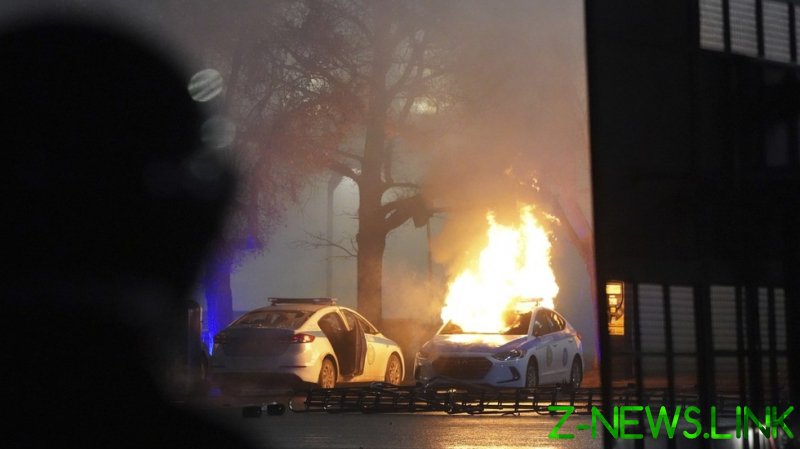 Angered by the government lifting price caps on energy, crowds of demonstrators toppled, smashed, and set on fire police vehicles in Kazakhstan’s largest city of Almaty. Intense clashes between cops and protesters were reported.

Video footage filmed on Tuesday showed mobs of protesters rocking a police van onto its side, vandalizing police cars, and setting several law enforcement vehicles on fire. Multiple vehicles appear to have been completely gutted by fire.

The burnings took place after an afternoon of mass unrest in Kazakhstan’s largest city. Clashes were reported earlier between riot police and demonstrators, with officers using flashbang grenades and non-lethal weaponry to disperse the gathering.

Meanwhile, President Kassym-Jomart Tokayev has declared a state of emergency in Almaty, as well as the Mangystau region of the country. Photos and videos surfaced online have also shown armored vehicles moving in the streets.

Protests have taken place across the former Soviet republic for three days, ignited by the government’s decision to lift price controls on liquefied petroleum gas, a move that saw gas prices roughly double within a matter of days. In a bid to placate protesters, Tokayev reintroduced price limits in the oil-producing Mangystau region, which has been a hotbed of unrest.

Kazakhstan is a major energy power, among the top exporters of oil globally and in the leading 20 for gas. The country’s government has subsidized liquefied petroleum gas for years, but argued that price controls needed to be lifted as keeping them in place was no longer sustainable.