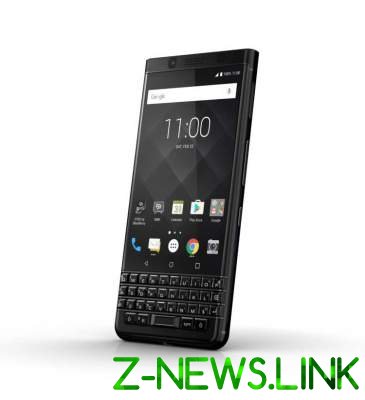 In Europe, BlackBerry KEYone Black Edition will be sold at a price of €649.

Company TCL announced in anticipation of the opening of the exhibition IFA 2017 in Berlin about the beginning of global sales of a special edition smartphone BlackBerry KEYone Black Edition.

BlackBerry KEYone Black Edition received in comparison with the standard version minor updates. The amount of RAM was increased from 3 to 4 GB, and the capacity of flash memory increased from 32 to 64 GB. The other characteristics remained the same.

The appearance of the smartphone is also almost unchanged. Only instead of metal trim and gray rear panel of the case now all black.

Expected in October will be a BlackBerry smartphone equipped with a touch screen. This will be the first water resistant member of the family BlackBerry, certified for resistance to the adverse effects of the external environment according to the standard IP67.

In September, the smartphone will go on sale in the UK, Germany, France, Canada, United Arab Emirates, Saudi Arabia and Japan. In Europe, BlackBerry KEYone Black Edition will be sold at a price of €649.