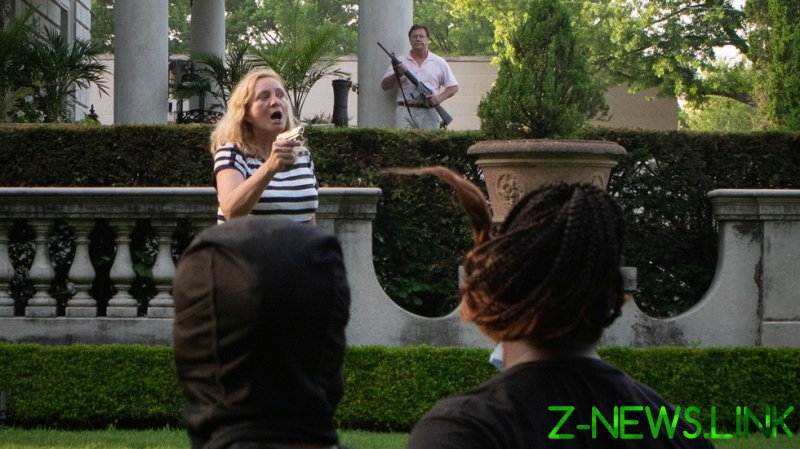 The McCloskeys became internet-famous in late June 2020, when they were filmed confronting an angry crowd of Black Lives Matter demonstrators that had broken through a gate outside their home. At the time, St. Louis was engulfed in riots that had spread from Minneapolis, following the death of George Floyd during a botched police arrest four weeks prior.

Demonstrators said they were peaceful and on their way to the mayor’s house when the McCloskeys threatened them with guns.

The couple, both lawyers in their early 60s, said they felt threatened after protesters broke down the iron gate to the private community and ignored no-trespassing signs.

In July 2020, Missouri Circuit Attorney Kim Gardner charged the couple with felony unlawful use of a weapon and misdemeanor assault. Gardner, a Democrat, was eventually reassigned from the case, after a judge ruled that she created an appearance of impropriety by sending fundraising emails referring to the case in her re-election campaign.

Another wrinkle in the case came as a prosecution document obtained by local media showed that Patricia McCloskey’s gun was inoperable when seized, but was reassembled by Gardner’s office to make it functional.

While Gardner went on to win her re-election bid, the case was assigned to former US attorney Richard Callahan, who amended the charges last month to misdemeanor assault and harassment, respectively.

The couple have given no explanation as to why they pleaded guilty to lesser charges, but local media noted that a misdemeanor plea would not interfere with Mark McCloskey’s campaign for the US Senate seat that will open up in 2022, with the retirement of Senator Roy Blunt, a fellow Republican.