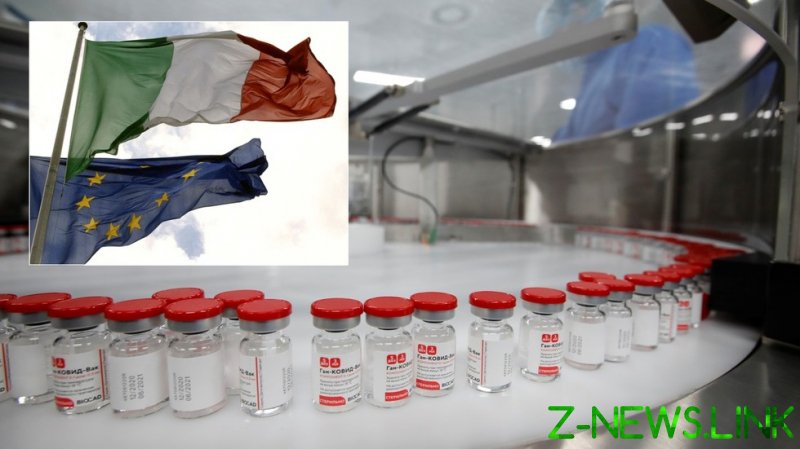 The deal was signed between the Russia Direct Investment Fund (RDIF), which bankrolls the production and distribution of Sputnik V, and Italy’s Adienne Srl company, the Italian-Russian Chamber of Commerce (CCIR), which facilitated the negotiations, said in a statement on Monday.

Adienne Srl is located in the northern Italian province of Monza and Brianza and is part of a major Swiss group, Adienne Pharma & Biotech. The company was the first to propose signing the strategic cooperation deal with the RDIF, and the talks continued for several months after that, CCIR said.

“This step will help solve the problem of the shortage of vaccine doses in Italy,” the statement added. Italy was one of the world’s hardest-hit countries at the start of the pandemic a year ago, and has seen more than 3 million confirmed cases and almost 100,000 deaths related to Covid-19.

The first EU-made vials of Sputnik V could be available in June 2021, with plans to make 10 million doses by the end of the year, according to the statement. The production process of the vaccine will be controlled by the Italian side.

“The agreement is the first of its kind with a European partner” for RDIF, proving that Italian companies “can overlook political differences” with Russia, Vincenzo Trani, CCIR president, has said.

In his Sunday interview with Italian broadcaster RAI3, the RDIF head Kirill Dmitriev confirmed that the fund was working with Adienne Pharma & Biotech group, while also continuing talks with the Italian government to further expand cooperation.

“There are many regions who are enthusiastic about producing Sputnik V domestically,” he said. Sputnik V boasts an efficacy of 91.6 percent, according to the Phase III trial data published by The Lancet medical journal.

By the end of the month, RDIF will announce 20 more joint projects in ten countries, according to Dmitriev. He said discussions have been under way on bringing Sputnik V to Germany and France.

One of the Italian regions interested in Sputnik V is Lazio, which is the most populous in the country and includes the capital Rome. The local authorities have already voiced plans to purchase the Russian vaccine as soon as it’s approved by the EU regulator, and have addressed the Italian government on the production of the jab.

Being able to make the vaccine at home is a “strategic factor” for Italy, Alessio d’Amato, Lazio’s health chief, told RT.

“It’s necessary to be self-sufficient to avoid problems. And in recent months, we’ve seen difficulties of procurement and on-time delivery” of the doses, he said, referring to the shortages of the EU-approved Pfizer, Moderna and AstraZeneca jabs, which marred the start of the vaccination campaign in the EU.

Sputnik V has so far been greenlighted for use in 45 countries, with the likes of India, Brazil, China, South Korea and others already producing the vaccine outside Russia.

However, despite the effectiveness of the vaccine being confirmed by the prestigious Lancet and other institutions, the EU appears to be in no hurry to approve it. The European Medicines Agency (EMA) only started a rolling review of Sputnik V earlier this week, with critics explaining the sluggishness in terms of political reasons.

“We’ve always said that the important thing is that the vaccine is effective, efficient and safe – in this case it doesn’t matter for us from which part of the world it comes,” d’Amato pointed out, expressing hope that EMA’s review of Sputnik V will bring “a positive result.”