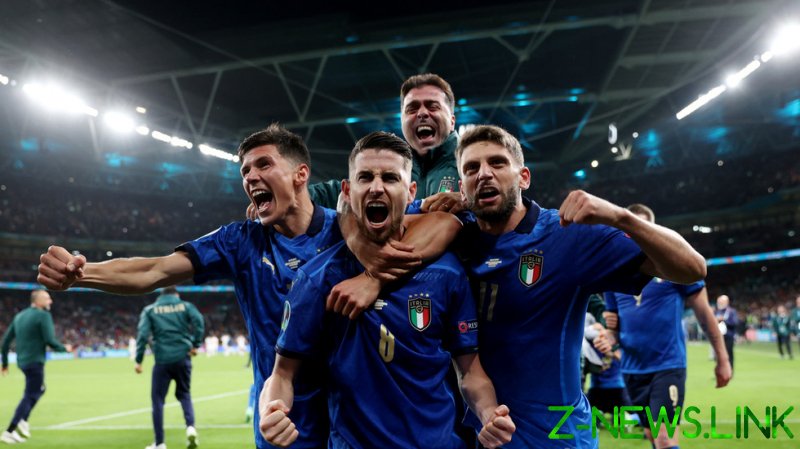 A goal on 60 minutes from Federico Chiesa had looked like giving Italy a brilliant smash-and-grab win, but substitute Alvaro Morata emerged to equalize for Spain with 10 minutes of normal time remaining to send a pulsating game in London into extra time.

The teams could not be separated, meaning a berth in Sunday’s showpiece would be decided by penalties.

Both teams missed their first spot kicks as Manuel Locatelli’s effort was saved by Unai Simon and Dani Olmo blazed his effort over the bar.

Andrea Belotti, Leonardo Bonucci and Federico Bernardeschi all then scored for Italy, as did Gerard Moreno and Thiago Alcantara for Spain, but Morata saw his tame effort saved by Gianluigi Donnarumma.

The stage was set for midfield maestro Jorginho to step up, and he calmly tucked his penalty beyond Simon to hand Italy a 4-2 shootout win and send them into the final, where they will meet either England or Denmark. 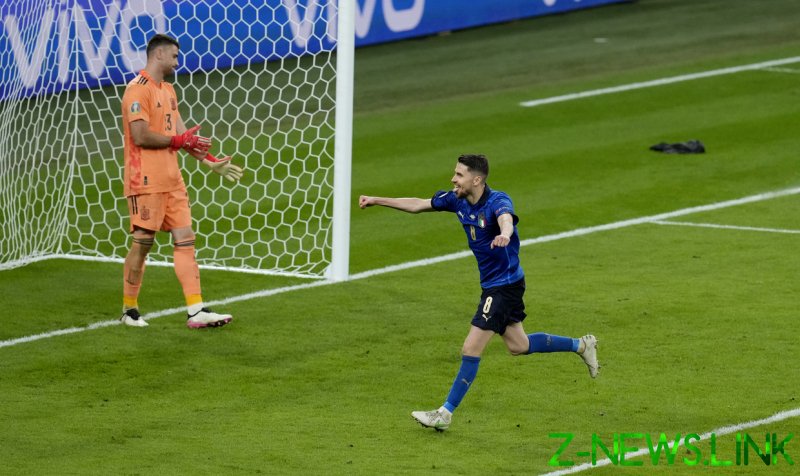 Such a revived forced under Roberto Mancini, Italy have been marked out as one of the best – if not the best – team at this summer’s tournament ever since they dismantled Turkey in the opening game.

This time on a thrilling night at Wembley, they were pushed to the limit by a superb Spanish team who had much the better of the match across 120 minutes of football but – as they have done so often – failed to land the knockout blow when Italy were reeling.

Having looked there for the taking after Spain equalized, Mancini’s men roused themselves to see out normal time before finishing extra time the stronger of the pair.

And it was they who held their nerve from the spot as Morata – the hero when he had leveled the scores – became the fall guy for Spain once again as he missed from the spot.

Italy now have a chance of a second European Championship but a first since all the way back in 1968 – and on this form they will surely be favorites in Sunday’s final, regardless of whether they face hosts England or a resurgent Denmark at Wembley.

A crowd of around 60,000 at Wembley bore witness to two grandees renewing a rivalry which has brought them together on more occasions than any other European heavyweights at a major tournament – and it was a meeting which did not disappoint.

A high-tempo first half failed to bring goals but did see the familiar pattern of Spain imposing their stifling game of press-and-pass on their opponents, enjoying close to 70% of the possession and playing much of their football closer to the Italian box.

In midfield, 18-year-old Barcelona starboy Pedri looked majestic, threading a delightful ball through to Mikel Oyarzabal which he failed to collect when perfectly placed. 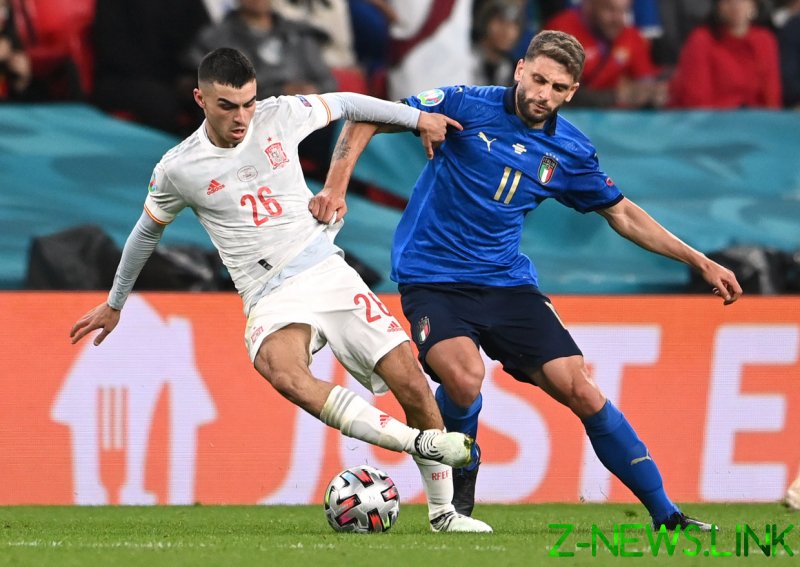 Pedri was sublime for Spain. © Reuters

For all Spain’s intricate passing, the enigma of their Euro 2020 was plain to see – the tournament’s top scorers but also guilty of some of its most abject finishing.

Luis Enrique had sought to rectify that with a line-up absent of center forwards Morata and Moreno, but Oyarzabal – making a first start at the tournament – and Olmo both spurned chances, the latter drawing a low save from Donnarumma when presented with a sight at goal.

Coming into the team for the injured Leonardo Spinazzola, Chelsea left-back Emerson was Italy’s brightest spark and almost gave them the lead when he struck the crossbar on the stroke of half-time after being slipped in by Lorenzo Insigne.

Five minutes into the second half, Spain skipper Sergio Busquets became the latest name to spurn an opportunity when he curled an effort over the bar from the edge of the box even though he was unmarked.

At the other end, Chiesa forced a low stop from Simon when he peeled away at the right-hand post, momentarily reviving memories of his wonderful finish against Austria in the last 16, but without the same end product.

It was Chiesa though who was to break the deadlock 60 minutes into the match – and when the goal came it was a classic smash-and-grab.

Gathering a Spain corner, Donnarumma set off a rapid counter attack which Spain failed to deal with despite Aymeric Laporte initially cutting out the ball. It fell to Chiesa just inside the box, he cut in to shift the ball onto his right foot before deftly curling his effort across Simon and into the far corner. 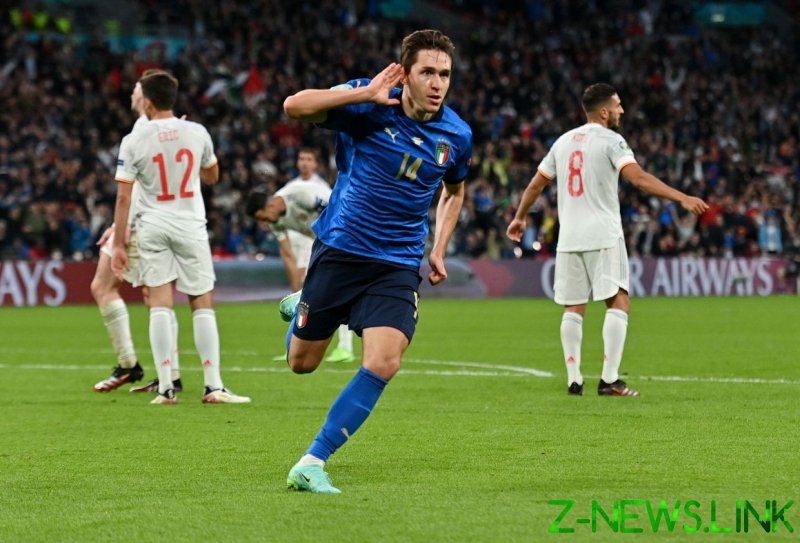 Chiesa put Italy in front with a wonderful strike. © Reuters

The Italian Job was on at Wembley as the Azzurri section of the 60,000 crowd was sent wild. There may not have been any of the Italian faithful allowed to travel from abroad, but those based in the UK were making their voices heard.

Seeking to immediately get back in the game, Koke sent an exquisite chipped ball into Oyarzabal, but the hapless Sociedad winger failed to connect with his head from six yards out. Having seen enough, Enrique brought Moreno into the fray after Morata had already been sent on as the clock ticked down.

So maligned throughout the tournament, it was Morata who would haul his team back into game with 10 minutes of normal time to spare.

Playing a one-two with Olmo, Morata burst into the box, leaving the ailing Giorgio Chiellini in his wake before side-footing coolly past Donnarumma. 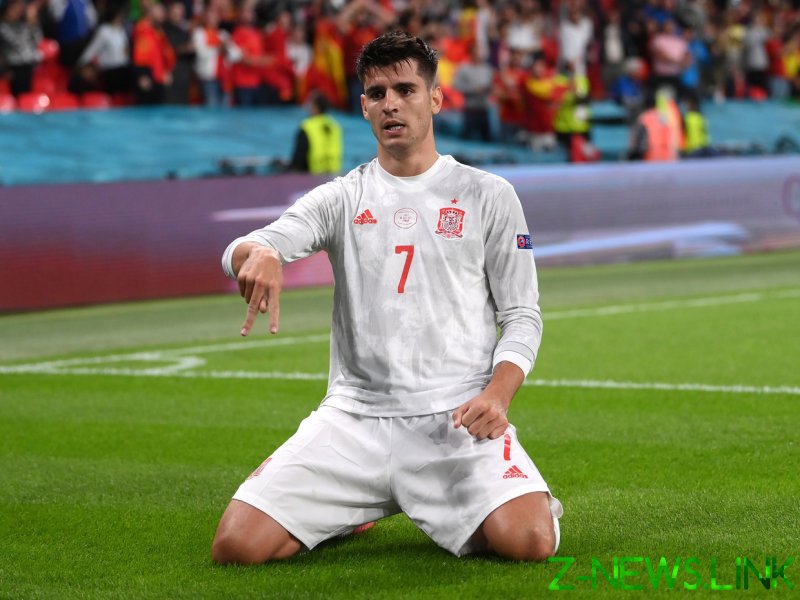 Morata scored the equalizer for Spain at Wembley. © Reuters

Spain pressed for the winner in normal time as Italy’s center-half pairing of Chiellini and Bonucci were creaking, suddenly looking all of their combined 70 years.

They – and Italy – held out but the Spanish armada went into extra time with the wind in their sails.

In midfield, the precocious Pedri continued to pull the strings and incredibly ended full time having completed every single one of his 55 passes.

But again the pendulum swung and Italy exerted a spell of pressure in the second part of extra time, even finding the net through Domenico Berardi, but he was flagged for offside. 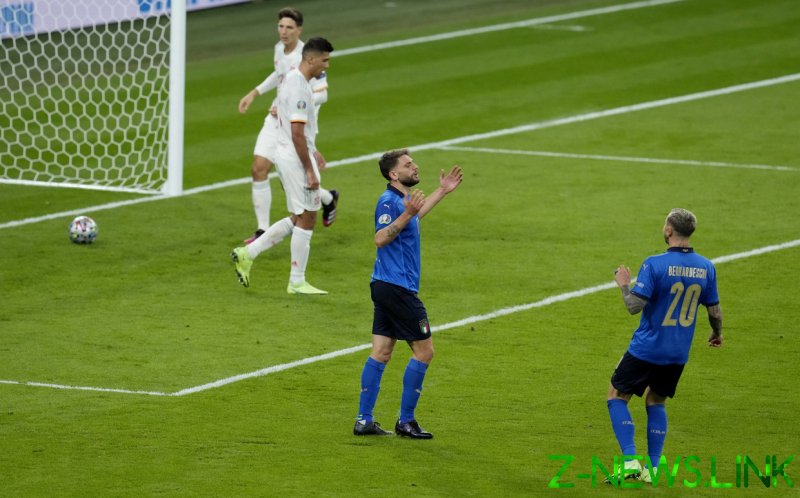 Neither heavyweight landed the knockout blow, and an epic contest would be decided by penalties.

After seeing off Switzerland in the quarter-finals in St. Petersburg from he spot, this time Spain fluffed their lines as misses from Olmo and Morata proved costly while Italy recovered from Locatelli’s early mistake to find their mark through Belotti, Bonucci and Bernardeschi – before Jorginho stroked home to send the Azzurri into a 10th major tournament final.

It was cruel on Spain and arguably neither side deserved to lose such a breathless encounter, but few would begrudge this Italy team their shot at glory on Sunday after lighting up this tournament yet again.