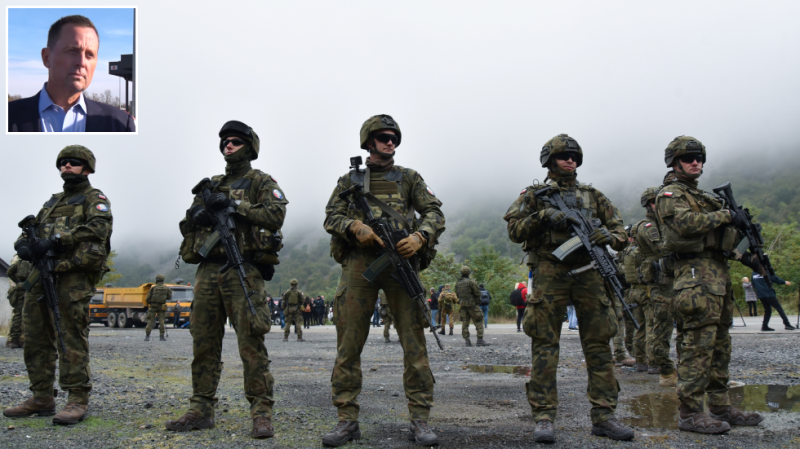 Grenell, who was Trump’s acting director of national intelligence and special envoy for Serbia-Kosovo talks, held a press conference on Thursday at Merdare, a “border crossing” between the Balkans state and its renegade province.

Kosovo, which was occupied by NATO after the 1999 air war, declared independence in 2008 with US support, but has not been recognized by Serbia. A deal brokered by the Trump administration in September 2020 saw Belgrade and Pristina pledge economic “normalization” and included mutual recognition of Kosovo and Israel.

In a statement issued after Grenell’s event, Trump called him “my Envoy Ambassador” and urged the “two nations” to not abandon the “historic” agreement for the sake of long-term prosperity.

According to Grenell, “many Americans are frustrated” because the deal to open borders for business has come to nothing. Speaking afterwards to journalist Ksenija Pavlovic, the  former diplomat said the US owed the region more than just “lip service,” and blasted current Secretary of State Antony Blinken.

“Blinken won’t do the job. The American administration needs someone who can walk into the Oval Office and do things,” Grenell said.

However, his visit to the “border” drew criticism from Viola von Cramon, a German Member of the European Parliament and envoy for Kosovo, who accused the Americans of stealing credit for the crossing.

“Merdare CC point was built by 6 [million] euro of EU taxpayers’ money,” she tweeted, adding that “history did not start with Trump.”

“You did indeed build it. But you couldn’t get it opened. Until Donald Trump got it opened. The two sides didn’t seem to listen to you. You are welcome,” Grenell shot back.

“As for the reopening in 2020 after the tariffs, we in the EU prefer not to topple a democratic [government] in order to have a new one that would listen to us,” Von Cramon replied.

Washington backed the no-confidence vote against Kosovo PM Albin Kurti last year, and the deal was signed by his replacement. Kurti returned to power this spring, however. His government sent heavily armed police to seize two checkpoints with Serbia in September, leading to a tense standoff that almost escalated into another war.