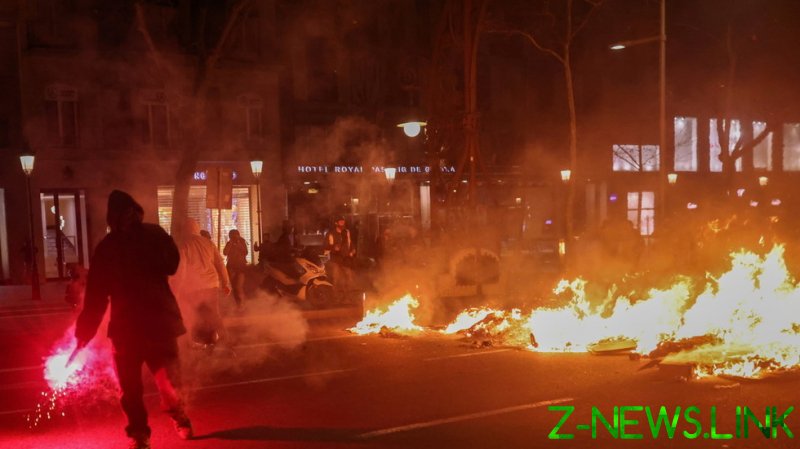 Hasel, whose real name is Pablo Rivadulla Duro, was arrested earlier on Tuesday after barricading himself inside the University of Lleida in Catalonia. He is to serve a nine-month sentence handed down in 2018 over song lyrics and tweets regarding disgraced former monarch Juan Carlos I, and a social media post praising a Spanish Maoist terrorist group.

Over 200 artists have signed a petition against his imprisonment, saying it amounts to persecution of freedom of expression, and thousands of people took to the streets on Tuesday in a number of Catalonian cities to show their support for the rapper.

In the regional capital Barcelona, huge crowds marched through the city streets calling for Hasel’s release. Clashes broke out there too, with protesters throwing various projectiles at police and turning dumpsters into flaming barricades while riot cops fired rubber bullets to disperse the crowds.

The demonstrations in Lleida, where Hasel was arrested, also descended into unrest, with eyewitness footage showing motorcycles ablaze and protesters throwing plastic chairs and other debris at police vans before officers charged at them with the vehicles.

In the Spanish city of Valencia, officers were filmed repeatedly lashing out with their batons and striking protesters while they pushed to clear the main square. Demonstrators could be heard chanting “Without freedom of opinion there is no democracy”.

Spain’s government last week pledged to ease punishments for “crimes of express” such as hate speech and insults to the crown or to religion.