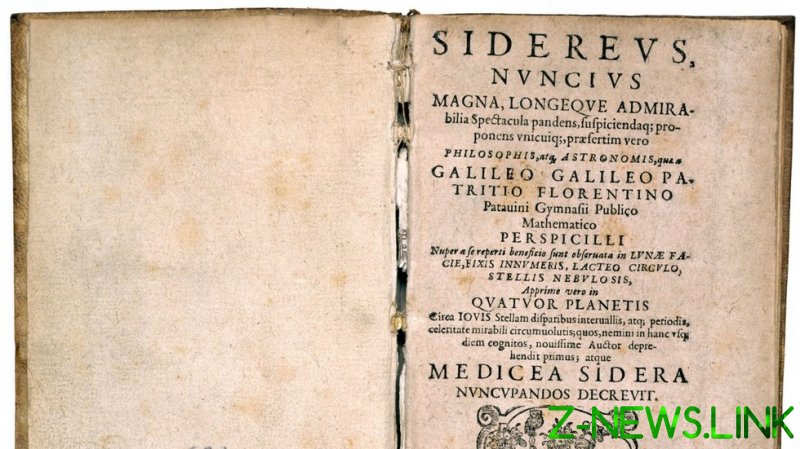 The Sidereus Nuncius, or ‘Starry Message’, originally published by father of modern science and astronomy Galileo Galilei on March 13, 1610, was the first systematic and published scientific study based on observations made through a telescope.

The astronomical treatise was completed using Galileo’s first telescopes, which had 8x to 10x linear magnification – the astronomer improved this to 20x in later models using lenses he ground and polished himself.

Galileo detailed the pockmarked, uneven, and mountainous landscape of the moon in the work, as well as recording numerous observations of stars among the Milky Way.

The Historical Brigade of the National Police has been investigating the disappearance of the treatise, which some valuations estimate to be worth in excess of €800,000, since 2018.

However, the theft and switch was discovered in at least May 2014, if not earlier, by restoration experts working on Galileo’s catalogue at Spain’s National Library.

“It happened by chance… we thought it should be in an acid-free storage container. We thought the specimen was too new to be from 1610,” said Fuensanta Salvador, one of the restoration experts handling Galileo’s works.

Despite this discovery, library authorities continued with the subterfuge, passing the work off as the original in exhibitions for years.

“We thought that more information was needed before reporting,” said Ana Santos, the director of the library since 2013.

“We wanted to know when the counterfeit copy arrived, the trajectory of the book, when it disappeared. The investigation had not been concluded, but more information was still to be gathered.”

The work had already been stolen once before from the National Library in 1987 but was recovered two years later.

Nick Wilding, a professor at the University of Georgia, informed Santos that digital copies made of Galileo’s work after 2014 showed it was a fake. Wilding had pedigree in the area, having previously discovered another fake on sale in a New York book store some years earlier in 2012.

According to Spanish media, the main suspect is a Uruguayan national who had inquired about the Sidereus Nuncius in 2004 and was caught tearing pages out of Greco-Egyptian astronomer Ptolemy’s maps in the same library.

“It’s a failure and a disgrace, but thefts happen. The world of counterfeiting is complicated. In the library there are more false copies which have been detected. There has been no effort made to hide anything,” Santos said.