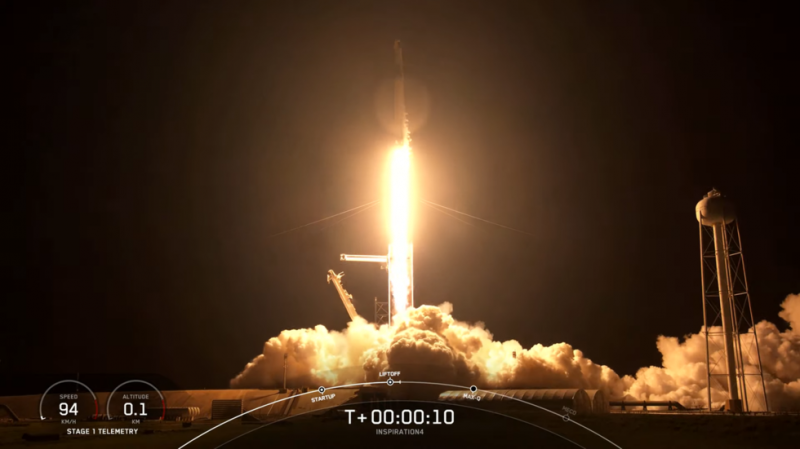 Riding atop a Falcon 9 rocket, the Dragon spacecraft lifted off from the Kennedy Space Center in Florida on Wednesday evening.

The separation of the rocket’s first stage appears to have been successful soon after launch, with the stage making a controlled reentry back to earth without issue, landing on a remote-controlled drone platform.

The second stage, meanwhile, continued its trip into space, exceeding speeds of 27,000 kilometers per hour (15,534mph) as it rocketed into orbit.

Separation from the second stage also went off without a hitch, seen in footage shared by SpaceX. Cheers and applause were heard from the Inspiration4 team during the successful decoupling.

The flight is crewed by American billionaire Jared Isaacman, who privately funded the launch as part of a campaign to raise money for St. Jude Children’s Research Hospital, a leading pediatric cancer center in Memphis, Tennessee.

Traveling with Isaacman will be a US Air Force veteran, a healthcare worker, and a geoscience professor. The quartet will orbit the Earth for three days at an altitude of 575km (360 miles), around 150km higher than the International Space Station. Though none of the crew are professional astronauts, all have undergone months of training to prepare them for the rigors of the mission.

Inspiration4 comes after two high-profile private space flights in July by Amazon tycoon Jeff Bezos and Virgin magnate Richard Branson. Bezos flew to the edge of the Earth’s atmosphere aboard the New Shepard rocket and capsule, designed by his company, Blue Origin. Branson, who beat Bezos to launch by little over a week, flew a lower suborbital flight aboard Virgin Galactic’s Unity 22 spaceplane.

Neither Bezos nor Branson actually orbited the Earth during their flights. Inspiration4 is thus the first fully private mission to carry humans into orbital space, a domain that was once the sole preserve of the world’s superpowers.

“I think that should send a message of all the things to come,” Isaacman told the BBC prior to the mission. “We know someday in the future, 50 to 100 years from now, there’s going to be a lunar base, you’re probably going to have some sort of Martian colony. And it has to start somewhere.”

“When this mission is complete, people are going to look at it and say, ‘It was the first time everyday people could go to space.’”