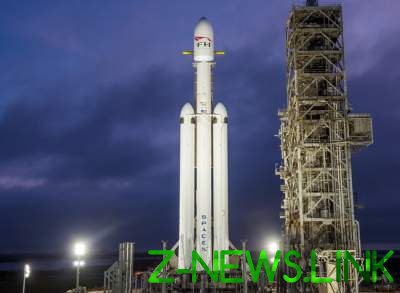 The cost per launch of around $90 million.

The first heavy carrier rocket Falcon Heavy private company SpaceX, which at the end of 2017 was delivered in parts to Cape Canaveral in the U.S. state of Florida and collected in a horizontal position, is raised at launch pad LC-39A Space center of a name Kennedy. Relevant photos and video from a drone posted to Instagram of her employees.

“With more than five million pounds of thrust at launch, which is approximately eighteen Boeing-747 at full power, the Falcon Heavy will be the most powerful rocket in the world”, – stated in the message.

When in January will be a trial run of a huge rocket, CEO Elon Musk promises to provide from day to day.

That SpaceX is developing super-heavy rocket, Musk announced in spring 2011 with an eye under start in 2013, but the completion and first run many times since then have been postponed.

As “normal” rocket company Falcon 9 heavy rocket is equipped with a system of multiple usage of the sustainer stage and side boosters (which are restored first stage of the Falcon 9). As fuel rocket uses kerosene RP-1, and the oxidizer is liquid oxygen.

The cost per launch of around $90 million.