SpaceX Crew-2 Dragon splashes down after 6 months in orbit 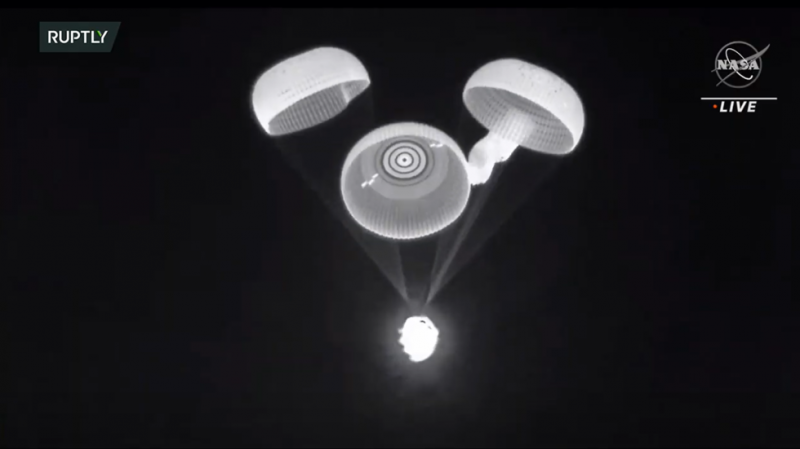 The private aerospace firm’s Crew Dragon Endeavor touched down off the Gulf Coast near Pensacola, Florida on Monday night carrying NASA’s Shane Kimbrough and Megan McArthur, French astronaut Thomas Pesquet of the European Space Agency, and Akihiko Hoshide from Japan’s JAXA, completing their Crew-2 mission after a nearly 200-day stay on the ISS.

SpaceX shared footage of the splashdown, which followed a several hour undocking process that saw the spacecraft push away from the ISS and position itself for reentry. The craft reached speeds of more than 17,000 miles per hour (27,350kph) as it rocketed back to Earth.

While a third manned mission with a Dragon craft was initially set for late October – with the new crew planned to replace the previous one a few days before the last team departed back to Earth – the next launch to the ISS has been delayed, first by weather and then by a “minor medical issue” with one of the astronauts. NASA said last Thursday that the crew should be cleared for takeoff by November 10 if all goes as planned, however.

Monday night landing appeared to go off without a hitch, with one minor exception: due to a malfunction with the craft’s space toilet, the four-astronaut crew was asked to “limit” their use of the facilities on the return trip. In case of ‘emergencies,’ the crew’s suits feature an “undergarment” – essentially a diaper – to collect waste, though NASA’s Commercial Crew program manager Steve Stitch stressed “it’s a short mission coming home.”

The Crew-2 mission involved several spacewalks and a number of scientific experiments, including growing (and eating) a batch of peppers on board the ISS to study the cultivation of food in space, and collection of human medical data. Crew-2 was SpaceX and NASA’s second operational manned mission to the ISS, with Crew-1 returning to Earth on May 2, 2021 after launching in November the year prior.