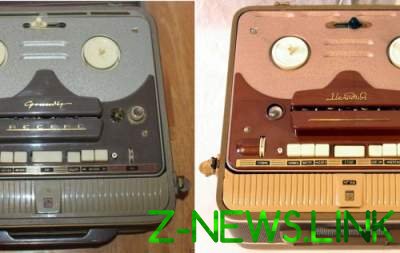 I always laugh when fans of the USSR begin to talk about some of the extraordinary technological capacities, opportunities and breakthroughs that existed in the Soviet Union — Yes, indeed, in military and space industries thing, but a large part of these technologies were borrowed from other countries. With regard to the automotive industry and production of “consumer goods” — that there are “borrowing”, and often outright theft of design and construction there was often.

Widely known textbook example of such theft — the Soviet photo camera “fed”, created in 1934, which is literally “zero” stripped German “Heads”, released two years earlier. This is just an isolated case, a small speck in a long line of cars, irons, vacuum cleaners, calculators and electronic games, design and design which USSR stole from other countries.

What was influenced this situation? First, the Soviet Union recognized not all the world’s patents and believed himself the right to simply copy a particular technique — “and prove that we stole, we won the color of the radiator the other!” Secondly (this is in my opinion a good illustration of the real situation in production), in areas that were not connected with the cosmos and the Commissar, and were not any fundamental developments, there was no process of weeding out unsuccessful models — because all the years of existence of the USSR its economy, in fact, worked for the military (and later the military space) rails. As a result, consumer goods were easier to steal or adapt, than to develop something of their own.

So in today’s post — the story of the design and the technologies that were stolen or “borrowed” in the USSR.

Let’s start with cars. Ford Model A was produced by Ford Motor Company from 1927 to 1931 year. Of course, mostly in black, as he loved Henry Ford. Models were mounted four-cylinder engine with a displacement 3,28 liters and developed a pretty decent for those times the power of 40 horsepower.

And the picture on the right shows the GAZ-a was produced in the USSR in 1932-m to year, interestingly — unlike the other examples in this post, technical documentation “GAZ-a” was officially purchased from Ford, that is actually the car was produced under license. This is one of the few cases, when the Soviet Union officially bought the license to manufacture.

“Moskvich-400” (pictured right) began to collect at the Plant of small cars in Moscow (“PCA”), on which you have installed the machinery and equipment exported from German plant in rüsselsheim as post-war reparations. In the USSR, only slightly changed the design of the car and made a variant in the sedan. I wonder, did the Soviet citizens the history of the emergence of the 400 Muscovite? They say that explanatory documentation on the Opel Kadett in the Soviet Union was not sushestvovala, and therefore, the plant “ZMA” had just disassemble the existing instances Opel and based on them actually “rebuild” a Muscovite.

Well, the first two is just release the same car under different names (bought the first license, the second received the law of reparations), but then begin the specific “borrowing”. In 1947 in post-war West Germany once again earned car plant in rüsselsheim, already on the new equipment, which in 1953 introduced a new model of Opel — Opel Rekord Olympie, only such cars were produced around 58,000 copies. The vehicle began to make ultra-fashionable at the time, pontoon style, when the body and wings are merged into a single silhouette.

And in the photo on the left is well known to all of you “Moskvich-402”, which is, shall we say, very very similar to the Opel Rekord — except that slightly changed the shape of the side wings of the grille, so made a four-door sedan instead of the coupe. Even the chrome trim on the rear wing left, slightly changing the shape. It does not explain “odnakovo tooling and equipment” (as in the case of the Opel Kadett and the Moskvich-400), as the two factories (in Moscow and in Western Germany) in the early 1950-ies worked independently from each other.

The Ford Mainline was manufactured from 1952 to 1956 at the Ford plant, had several versions of the interior and was introduced in version four-door sedan and coupe (photo — version of the coupe). The car was positioned as the car of middle level was created for the American middle class. In 1957 was replaced by the model a Ford Custom.

The photo on the right is GAZ-21, or all the well-known “twenty-first Volga”, produced from 1956 to 1970-th years. In my opinion, the design-borrowing evident, particularly in the front of the vehicle — grille and bumper of the Volga almost 1-to-1 follows Ford, and even “swift deer” on the hood of a patterned decorative element Ford)

As you can see in this example, the USSR stripped design not only small cars and cars of the middle class, but quite a car that can be attributed to the higher class. In the photo on the left, Packard Patrician, issued in 1956 in fashion in those years, “pseudoclassicism” style rear fenders are reminiscent of some parts of the rocket, and the whole machine is very similar to the futuristic cars from the books of the early fifties — there on these cars, people come to the city center to the spaceport, to carry astronauts to Mars or Venus)

Pictured right — a Seagull in the former Soviet Union the car of the General secretaries and party officials of the highest level. It is easy to see that the design is very similar, even copied the font style in which is written the name of the model (can open the picture in a new window and see larger resolution).

The Fiat 125 was introduced in 1967 and was fashionable at that time “speed” profile in the late sixties, these cars looked unusual and very modern compared to the streamlined cars of the fifties. The car was produced in several variants and in Poland (then NDP) under license produced version of the Polski Fiat 125.

VAZ-2103 Lada was developed in conjunction with the Italians, however, according to “Wikipedia” — inside the VAZ-2103 was so much sawn compared to the Fiat 125 that represent two essentially different cars. Maybe so, but as for me — the similarity in design is obvious, and it is not developed in the USSR and in Italy. Even the door handles and ventilation grids are the same.

Chrysler Simca 1307 was produced from 1975 to 1986-th year with the ability to changes and additions. Exactly a year removal from the production Chrysler factory begins production AZLK Moskvich-2141 hatchback, which very much resembled the design of the Chrysler 1307. Moskvich 2141, by the way, was produced until 2002.

OK, enough about cars, let’s see something else. For example, Leica-2, released in Germany in 1932, and the photo on the right is a Soviet camera fed, released in 1934. It is not just copying the design, and almost an exact copy of the Leica. Even the design engraved logo something similar.

By the way, the almost absolute similarity of these two cameras Soviet photographers habitually called the Soviet camera Leica.

I think it’s obvious, even to write nothing. Stripped a widely “zero”, until the key layout and design of the carry handle.

An example from the world of calculating machines — two devices are also very similar, and judging by the location and number keys have the same schematic structure. We should note that the housing Sharpe is more elegant, it right and I want to put on the table)

Example of home appliance — one-to-one copied the design (and explicitly constructed) road for Ironing clothes. Not to mention that in the USSR such a thing already appeared 13 years later, its Western counterpart)

And here’s another example from the world of computers — two calculator virtually the same. The Soviet appeared a year later. 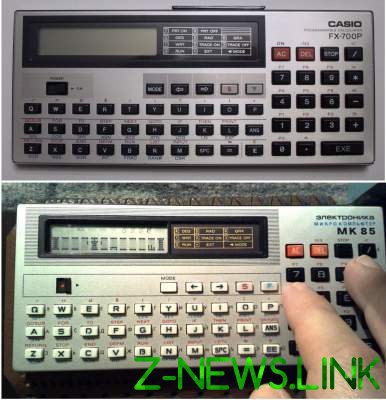 Programmable — or, as it was called in the USSR, “engineering” calculator. Casio appeared in 1983, its Soviet equivalent in 1986. it is Obvious that the scheme is just stripped “zero”, in the same way as design.

The last example that wounded me to the heart. I thought that even though electronic games in USSR did, but no — the famous “Nu, pogodi!”, where the wolf catches eggs, just exactly copied from the game “Egg” by Nintendo (by the way there is also a wolf as a main character) and my favourite game of my childhood “Mysteries of the ocean” one-to-one copied from the game Octopus.