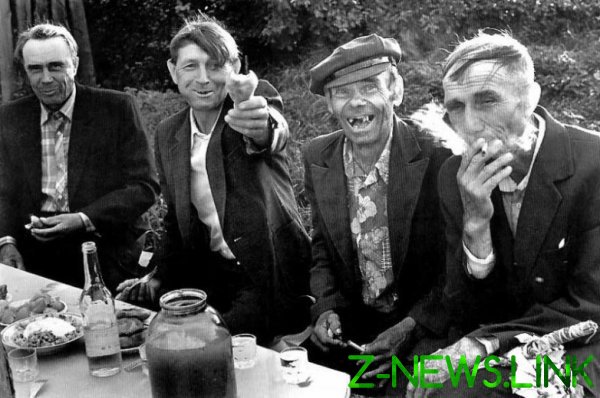 So, friends, today will be a very interesting post about Soviet culture of poverty. One of the myths that are still actively walking among fans of the scoop, says that saying “Soviet Union was a scientific power and all its citizens lived well and richly”. Actually “scientific” of the USSR often had no relation to the lives of ordinary Soviet citizens.

This feature is very well seen in the Soviet magazines of those years. Reading publications on the first pages with pathos told about the vast and comprehensive construction sites, the great cosmic victory and about the wonderful future that is almost here communism and weather will be monitored via airship. And on the last pages of shamefully hiding the heading “letters”, where ordinary Soviet citizens shared with each other ideas about how to make baby toys from matches and acorns, recipes, as on the fifth day to “revive” stale bread, how to make scarce mittens ears from the old fur hats and how to fix the old, long-broken glasses with glue, thread and blue tape.

For all the years of existence of the country in the Soviet Union, in fact, never was born a normal market of consumer goods, in fact impossible under the planned economy. A lot had to do yourself.

So in today’s post — selection “of diys and tricks” from the magazine “Science and life” in the eighties, which well show the real condition of the Soviet economy. Make sure you check out the article below, write in the comments your opinion, well to friends to add do not forget) And telegram channel also subscribe.

02. One of the first pages of one of the editions of “Science and life” in 1986, cites the program of the CPSU aimed at the solution of social issues of work, life and culture and about how much will be released in any years. To schedule something planned, but in practice it resulted in perebrosali of junk that no one wanted to buy it in a shortage of really needed productsthat were sold under the counter to “their” customers. 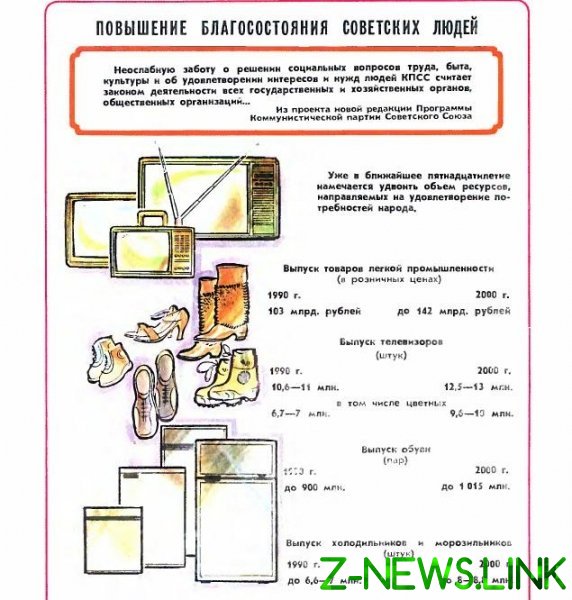 03. This same issue after a bravura story on plans to “meet the needs of the people” talks about how to extend the life of tattered socks, how to glue broken porcelain dishes, and how to fix the faucet, at which time the valve seat formed shell. Throw out the old ušatannyj mixer tap and buy a new one — it was for the Soviet people can be a challenge. 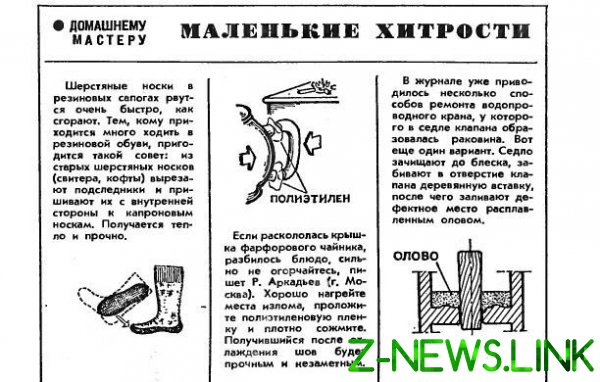 04. Other editions of the magazine in the same year, suggests ways to revitalize stale bread to create homemade taped to packages of derevyannyh pegs (well, that’s okay) and sealing vodoprovodnyi pipe with chewing gum. Tell me, you would now have come up with the idea to seal the tap connection gum? In the USSR there was neither sensible sealants or normal private plumbers (only shabashniki from the housing Department). 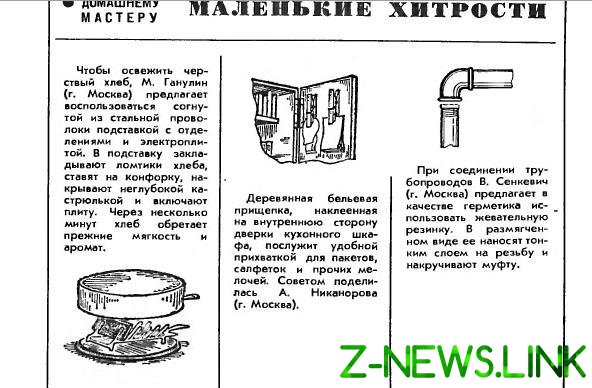 05. The readers here propose to solve the problem of lack in selling pobeditovye drill bits for concrete (probably unplanned by the Soviet industry), no key anchors for screws (in the Soviet Union did not exist as a class, some sort of anchors independently planed wood) and the problem of applying a putty — smeared window offers not a specialized tool, and a Shoe horn. 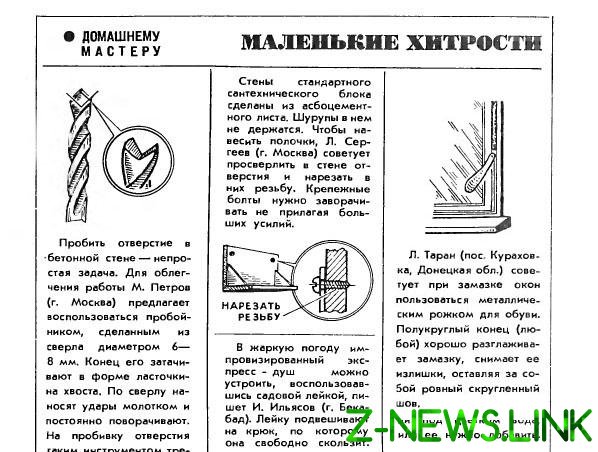 06. How to store bread in the bag, roll the cucumbers in the jars and fasten the bristles in the cheesy brushes: 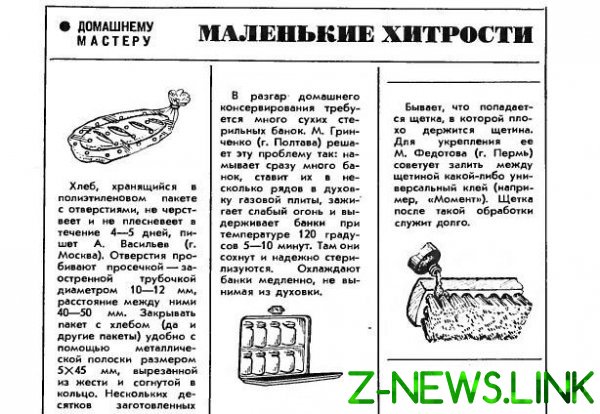 07. My favorite. “Fur mittens for a child in extreme cold — a necessity. Meanwhile, they are often lost, and to buy them is not always possible. Great gloves out of old fur cap” — a very scary text. Other readers offered to make a spray of the hybrid enema with a nozzle for aerosols and seal the Windows with linen cord. 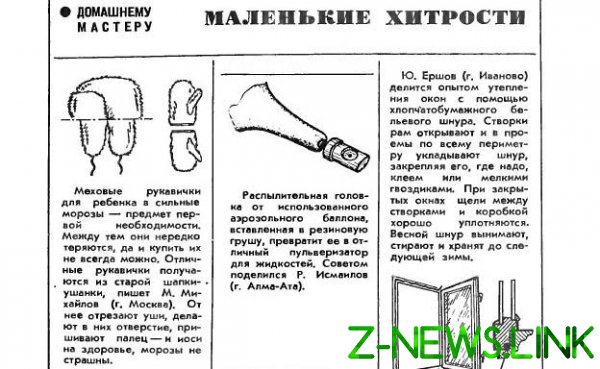 08. Talk about a lack thereof in the Soviet light industry normal tile glue, knives for fish (did not exist as a class) and cleaning products for metal. 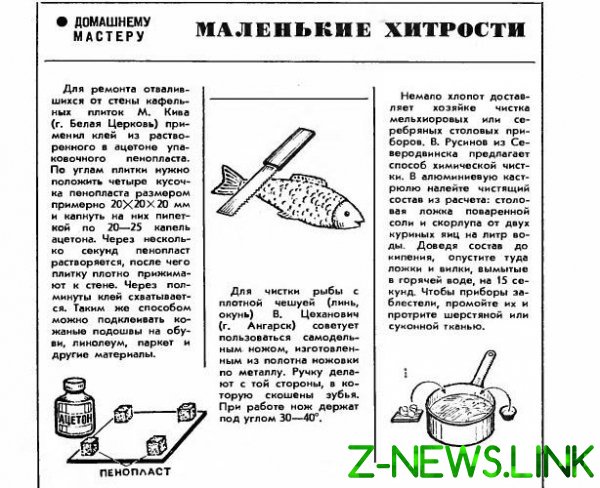 09. And the readers here thought for engineers about how to look like the capacity for insect repellant and how to improve a broom. 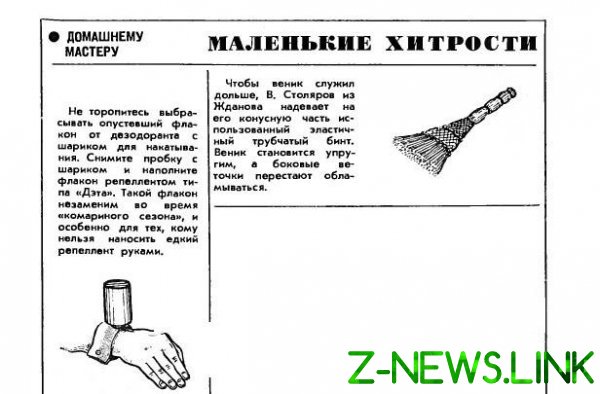 Here was just such a “simple Soviet life” — in fact, it was the culture of poverty, equal layer spread on all segments of society. Poverty is actively poorhouse and podbadrivali government. Now, many who write about the Soviet Union, don’t like to talk about the life of people in those years, preferring to remember the newspaper editorials of the Brezhnev era — “Oh, what a great country was! The Americans fear us! And in space we! And Cuba has long been ours!”