Home / WORLD / Southwest pilot placed on leave, could face charges after alleged assault on flight attendant during ‘dispute over masks’

Southwest pilot placed on leave, could face charges after alleged assault on flight attendant during ‘dispute over masks’ 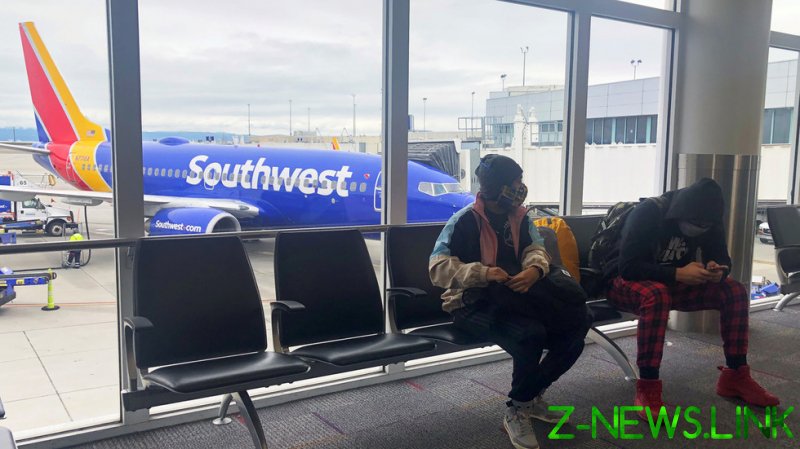 The fight broke out at a hotel bar in San Jose, California on October 18 during a layover stay, according to police records cited by USA Today.

“The event involved a disagreement over mask wearing or masks,” a spokesman for the San Jose Police Department told the outlet, but declined to provide more detail on the altercation. The case was referred to the local DA’s office for possible charges.

Brandy King, an airline representative, said the pilot has been placed on leave following a “crew disagreement during an overnight trip,” adding that it was in the airline’s policy not to “discuss personnel issues externally.”

Days after the alleged assault, Southwest reportedly issued a memo to staff reminding them of the need for “civility and respectful discourse” on and off duty, while warning that “Crossing the line in a heated conversation can be a violation of our guidelines for employees and can even end in loss of job.”

Penned by Sonya Lacore, Southwest’s vice president for inflight operations, and Bob Waltz, VP of flight operations, the memo also appears to address incidents like the purported off-duty brawl last month, saying “when the day is done and we retire for the day/evening, it is especially important that we measure our discussions when they veer toward sensitive topics that elicit emotional responses.”

“Being off-duty is never an excuse to ignore the Golden Rule. Everyone has a different story before coming to work, and many times the best support we have is one another,” the memo continued.

While the airline’s pilots union has not addressed the incident and the pilot involved has not been identified, Southwest’s flight attendants union said it is aware of the situation “and the fact that the investigation continues,” adding “As with all flight attendants we represent, we will support our member in accordance with the law and our collective bargaining agreement.”

The alleged fight over masks is only the latest in a string of controversies for Southwest in recent weeks. The airline was forced to launch an internal probe late last month after a pilot reportedly said “Let’s go Brandon” to passengers through a loudspeaker during a flight. The seemingly innocuous phrase has become code for “F**k Joe Biden” thanks to a viral video clip in which an NBC sports reporter confuses a vulgar chant against the president for support for NASCAR driver Brandon Brown.

An Associated Press reporter claimed to be on the flight in question, and says she was nearly “removed” from the plane before takeoff after trying to ask the pilot about his use of the phrase.

Southwest has also faced major disruptions to flights as of late, but has denied the issue stemmed from a mass ‘sick-out’ staged by employees protesting a company vaccine requirement. The airline nonetheless reversed course on the mandate in mid-October, allowing staff to apply for medical or religious exemptions and to continue working in the interim.