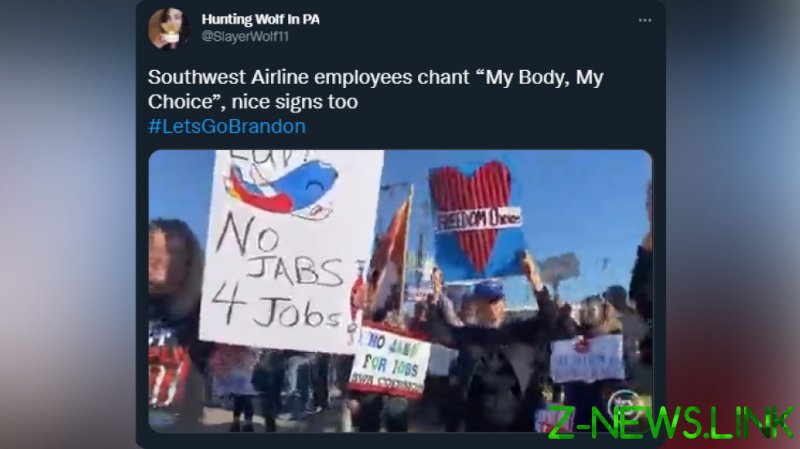 On Monday, hundreds of demonstrators held signs aloft that read, “Terminate the mandate,” “Freedom not force” and “No jabs for jobs,” as they convened at Southwest Airlines’ headquarters in Dallas to protest against the mandate.

Attendees chanted “My body, my choice” as they lined the highway outside the airline facility. Some carried US flags, while another waved a flag adorned with an eagle superimposed on the stars and stripes.

In footage shared on Twitter, one pilot taking part in the protest said that the airline must stop its “medical tyranny”.

A public invitation for the demonstration, shared on Facebook, called on people to exercise their First Amendment right in the name of “freedom, not force.”

Southwest Airlines set a deadline for staff to be vaccinated against Covid for the first week of October under a federal mandate as a company holding contracts with the US government. The airline canceled thousands of flights last week amid rumors of staff calling in sick to protest against the vaccine mandate, with Southwest saying the cancelations were due to air traffic control issues and disruptive weather.

Last week, the Dallas-based airline said it would not comply with an executive order from Texas Governor Greg Abbott, who deemed compulsory vaccinations unlawful. Inoculations should “always be voluntary for Texans,” he stated.

Southwest said in a statement on the matter that “according to the President’s Executive Order, federal action supersedes any state mandate or law, and we would be expected to comply with the President’s Order to remain compliant as a federal contractor.”