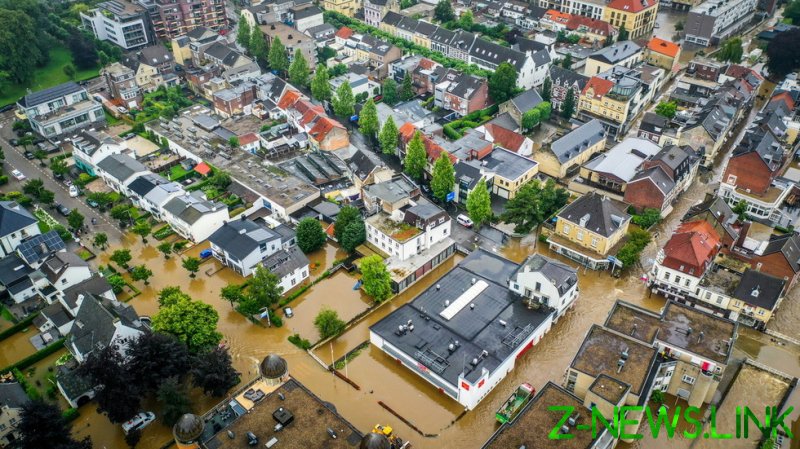 A number of towns and villages along the Meuse and Rur rivers in Limburg were advised to evacuate on Thursday, after water levels reached record highs following the downpour, Reuters reported. The national government deemed the province a disaster zone late on Thursday night, invoking a law which allows victims to be compensated for losses sustained during the floods.

The town of Valkenburg has been among the hardest-hit, with Mayor Daan Prevoo noting that a “river” is flowing through the city “that does not belong there.”

Footage captured in Valkenburg showed just that, with massive quantities of murky water seen surging through its streets.

Scores of soldiers have arrived in the town to assist relief workers with the evacuation efforts, helping residents find shelter at emergency centers or with friends and family, local media reported. One nursing home was fully evacuated, while around 400 homes in the city remain without power due to the floods, with grid operator Enexis saying it will not be able to bring them back online for some time.

Mayor Prevoo also warned of possible food shortages, as trucks that transport goods are largely unable to enter the city.

“We still have 375 homes that have no electricity, so no working refrigerator because they are under water. Those people have no food. The hotels are full of evacuees, but supplies cannot reach Valkenburg because of the water,” he said.

Maastricht, Limburg’s provincial capital, is also expected to be inundated with floodwaters, with local authorities warning the town could be partially underwater by Friday night. Some 10,000 residents were evacuated in anticipation.

Other European nations have also seen serious flooding in recent days, with Germany bearing the brunt of the inclement weather. At least 59 deaths have been reported in the country, in addition to around 1,300 still missing. In Belgium, nine were killed as a result of the floods, according to local media, while a nuclear power plant in the village of Tihange was placed on high alert as waters in the nearby Meuse continued to rise.