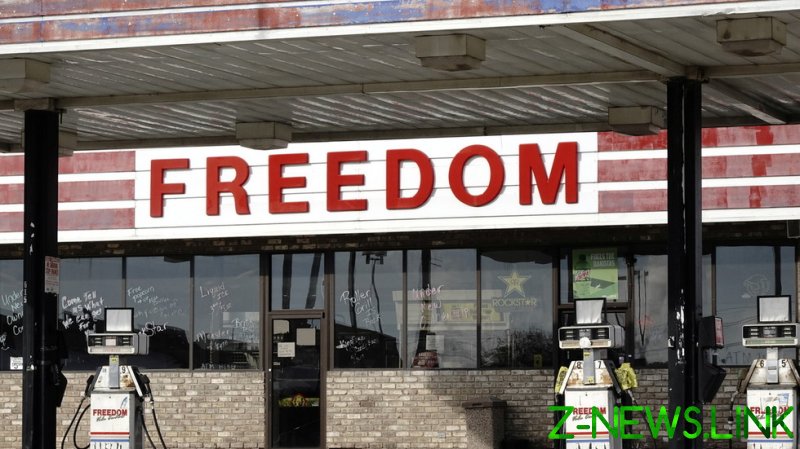 Noem has vowed to take the Joe Biden administration to court if it tries to impose a blanket vaccination requirement on Americans, claiming that such an order would be illegal.

“If Joe Biden illegally mandates vaccines, I will take every action available under the law to protect South Dakotans from the federal government,” Noem sounded off on Twitter.

The tweet came hours after the Food and Drug Administration (FDA) granted its full approval to the Pfizer-BioNTech vaccine, one of three that have been used as part of the mass vaccination drive in the US. The others remain approved on an emergency basis only.

President Biden cited the long-awaited green light from the FDA to urge private businesses, nonprofits and other organizations to “step up the vaccine requirements” and demand that employees and visitors show proof of vaccination. “Require it,” Biden said, doubling down on his previous rhetoric that total immunization was necessary to put an end to Covid-19 in the US.

Although Biden had already mandated all federal workers to either get a Covid-19 jab or face regular testing, and recently extended a similar requirement to staff at certain nursing homes, he has not floated a broader federal vaccine mandate – something that is considered to be out of his reach.

In late July, Centers for Disease Control and Prevention (CDC) Director Dr. Rochelle Walensky caused a stir when she appeared to suggest the administration was “looking into” such a mandate, only to walk back her comments later the same day and “clarify” that she was speaking about mandates by private companies and some government agencies.

Noem’s pre-emptive vow to defy mandatory vaccinations has earned her both praise and criticism online. Opponents of the administration’s vaccine policy lauded her for “fighting for freedom,” some even saying they were contemplating a move from California to South Dakota. Vaccination advocates, however, blasted the governor for letting constituents “die” for her “political ambitions,” and urged her to encourage immunizations instead.

Biden has waged a war of words with Republican governors, such as Florida’s Ron DeSantis and Greg Abbott in Texas, who have been at odds with the Democratic administration’s Covid-19 policy, banning businesses and schools from requiring masks.

Biden argued that requiring masks is “doing the right thing,” saying it was in the governor’s “power” to “save lives.”

“I say to these governors: Please help, but if you aren’t going to help at least get out of the way,” he said on August 3.

Republicans argue that masks and vaccines should be left up to personal choice, noting that nobody is prohibited from wearing face coverings or scheduling vaccinations.

There has been a steady increase in new cases in South Dakota over the past several weeks, but no deaths were reported since last weekend. And despite the recent surge, South Dakota still remains below the US national average in cases.